Hospitals Are Now Required To Post Costs Online, But Most Haven't 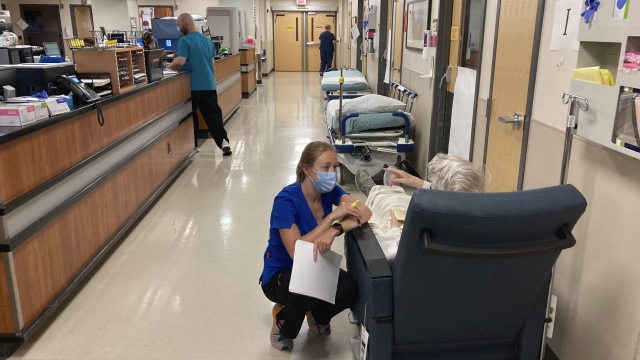 Robert Smith went to the doctor in fall of 2020 for a routine colonoscopy, a procedure he's gotten for years due to having Crohn's disease. All was well until he got the bill.

Smith doesn't want to be shown on camera because he has family members who work for NYU Langone — the hospital he visited.

Smith's billing statements show the total charge for the colonoscopy was hundreds of dollars higher than his last colonoscopy with New York Presbyterian in 2015, even though he had the same insurer. Even when adjusting for inflation, Smith says it isn't close.

"I could see if it was something extraordinary that happened during the procedure, that would be a cause for a huge or significant price increase, but that wasn't the case," Smith said.

Kaiser Health News Reporter Julie Appleby says a lot goes into the cost of a procedure, varying from one hospital to the next.

"Prices can vary based on who your insurer is, who the hospital is, what their relative sort of position in the market is, how well they can negotiate," Appleby said.

In Smith's case, a letter from NYU Langone states the difference came down to the negotiated rate with his insurer.

Newsy reached out to NYU Langone for comment and never heard back.

In 2021, the Centers for Medicare and Medicaid Services, or CMS, implemented the Price Transparency Rule, requiring hospitals to make the cost of a procedure readily available online so people can shop around.

"Why wouldn't anyone want to know where they could get a $300 MRI versus paying $3,000 in a major hospital system? That's huge," said Cynthia Fisher, the founder of PatientRightsAdvocate.org.

One man and his wife downsized and sold most of their belongings to pay for his medical costs as he fights brain cancer.

Now, the NYU Langone website does feature a cost breakdown and a tool to help consumers know their estimated cost and potential additional charges, though it's unclear when the information was added.

Fisher says while NYU may have the information, the majority of hospitals haven't followed suit.

"We are over 20 months into the law requiring all hospitals to post their prices, and unfortunately, only 16% of the hospitals in this country are posting all of their prices," Fisher said.

The federal government has fined two hospitals a little more than $1 million for noncompliance. A spokesperson told Newsy as of October 2022, it has issued 388 warnings and requested 204 corrective action plans, adding that 243 hospitals had addressed previous citations.

"Within a couple of weeks, those hospitals posted exemplary files where the prices are now easy to find in those hospital systems," Fisher said. "That is success to change the game."

CMS encourages the public to report any hospitals that aren't in compliance via their website.

"Some of the larger hospitals could face fines of up to $2 million for not posting this, so there are some teeth in that law," Appleby said.

"Being an educated patient consumer is very important because you'll find that a lot of mistakes are being made," Smith said.

The transparency rule isn't perfect, and sometimes the prices are difficult to find online. Still, Fisher says it's a step in the right direction to making the costs competitive.

"It's broken, so the only way we can change the system is when we, as patients, have power to be well-informed about our health decisions," Fisher said.