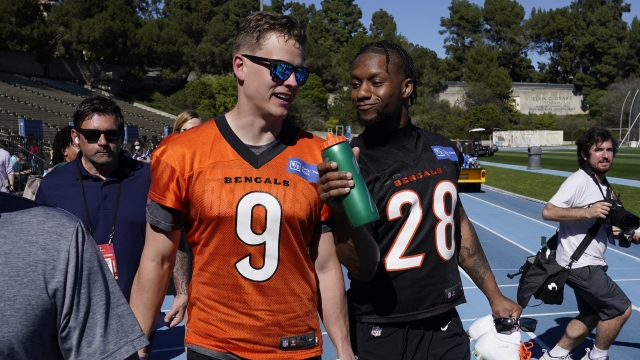 Temperatures for this year's Super Bowl could be in the mid to upper 80s.

From Los Angeles down to San Diego, records are falling as a rare heat advisory is simmering southern California.

There's a high pressure dome sitting over the southwest driving up the temperatures and whipping up the Santa Ana winds. And SoFi stadium, where the LA Rams and the Cincinnati Bengals will square-off on Sunday, is not air conditioned, but it does have a glass canopy roof.

The National Weather Service says the heat advisory for temperatures in the 90s will last through Sunday night. At kick-off time the temperature will be in the mid to upper 80s, which could break a Super Bowl record.

The Bengals aren't used to the heat. They are more accustomed to the cold of winter in Ohio, so they had to move their practice to a less windy spot. But the coach says the heat isn't impacting his team.

"We're hydrating as best we can," Cincinnati Bengals coach Zac Taylor said. "You know, it's just like when we deal with the cold. It's going to be really cold in a lot of games we play, you go out there and manage the best you can as you practice through the week. We're practicing in some pretty good heat right now. I think our guys will do a great job handling it."

Historically the temperatures are colder during the big game. The highest temperature for a Super Bowl was in Los Angeles in 1973 at 84 degrees. The other warm years include San Diego in 2003, Pasadena in 1987, then a few years in Miami and Santa Clara.

Four southern California cities set new high temperature records on Thursday.  The area has only had seven 90-plus degree days in February since the 1940s.