Hours After Getting Married, Groom Dies Trying To Help 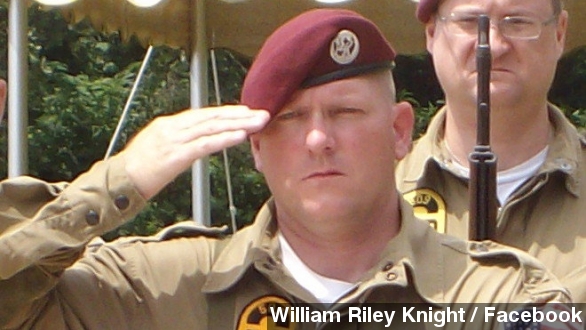 A newlywed and veteran died in Indiana after trying to help a stranded motorist.

What was supposed to be one of the happiest days of one man's life turned into his last in just seconds.

William Riley Knight, a former U.S. Army Ranger, pulled over to side of the road Sunday to help a woman whose car was stranded in a ditch. Knight had just left his wedding reception with his new wife in northern Indiana. (Via WGN)

"... that's when he was hit and killed by three cars, the woman he was helping also died. His bride was in the car saw the whole thing happen." (Via WRTV)

Those who knew Knight say he was a great guy.

"Very outgoing, always wanting to help somebody. He was good to be around my kids, I'm glad my kids got to know him." (Via WTHR)

Local police say alcohol was not a factor and the drivers who struck Knight stayed on the scene after the accident. No charges have been filed up to this point. (Via WISH)

According to WBBM Knight acted in community theater and enjoyed hunting. He is survived by his new wife, and four children.