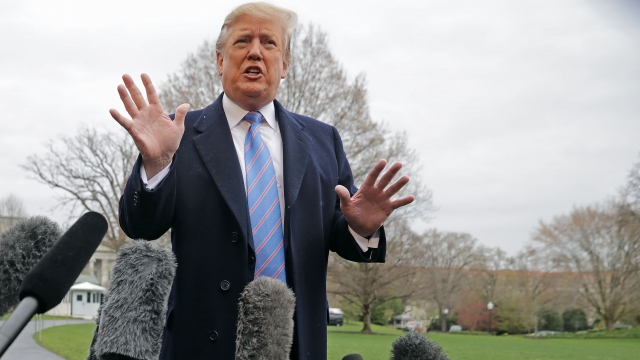 President Donald Trump has infamously refused to release his tax returns, and there are a number of groups trying to force him to.

Opponents of President Trump have been vying for his tax returns for years. But congressional lawmakers aren't the only ones making plays for those financial records.

"They know the terms under law by which the IRS can give them the documents. But political hit job is not one of those reasons. So they know ... ," acting White House chief of staff Mick Mulvaney said.

"Oh, no, never. Nor should they," Mulvaney said.

Democrats took control of the House in January, thereby taking control of what the House investigates. Rep. Richard Neal, chairman of the House Ways and Means Committee, formally asked the IRS for six years of President Trump's personal and business tax returns. The House Oversight Committee, led by Rep. Elijah Cummings, is trying to get 10 years of financial records from an accounting firm tied to the president. That request asks for both personal and business records.

Individual states are also looking at ways to publish the financial information of prospective presidents.

More than a dozen states are considering legislation that would require presidential candidates to release their tax returns. The details of the bills vary, but each one would make publicly releasing tax returns mandatory in order to be listed on the state's ballots.

State lawmakers in New York are taking a slightly different tack. A bill there will aim to allow New York officials to release an individual or businesses' *state tax returns as part of a legislative investigation. The key difference here is the bill is focused on the state return, not the federal return. And in the case of President Trump, who lived much of his life based in New York, his state return is likely to contain a lot of the details people are so curious about.

The effort from the House Ways and Means Committee might have the best chance of actually getting the president's returns. Neal used a little-known tax law to make his request, and that law does not include any situations that would allow Treasury Secretary Steven Mnuchin to refuse it.

But all of these efforts could face court challenges from any candidate who, like President Trump, doesn't want to release their returns.