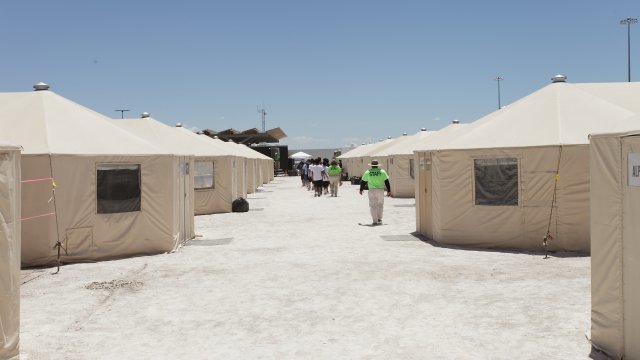 The White House says it's reunited all but 711 children with their parents. Democrats want to know how much the practice is costing taxpayers.

The images are seared into the minds of millions across the globe. Children, separated from their parents, unsure of when they'll be reunited. The emotional toll is visible, but the cost of this crisis is adding up. Some estimate that the government is spending $1.5 million per day on housing alone.

Democratic Congresswoman Cheri Bustos wrote a letter to Secretaries Alex Azar of Health and Human Services and Kirstjen Nielsen of Homeland Security asking for cost details more than a month ago. The letter was cosigned by 107 of Bustos' Democratic colleagues.

"There seems to be this dead silence even from good Republicans speaking out against the abhorrent behavior against the president," Bustos says.

Her office says it hasn't gotten a response to either the original letter or this marked-up recent one.

"This is a very unconventional way of running things," Bustos says. "They don't feel any obligation to respond to members of Congress. Give us an answer; that's all we're asking. We know what it's costing from a human perspective, from a humanity perspective. But the taxpayer dollars — what's that costing? They couldn't even bother saying, 'We're going to look into this.'"

The letter requested cost analysis for numerous concerns, from average per day bed costs to amount spent to transport separated children; amounts these agencies are paying in rent to the number of staff hours spent on this policy. They also asked for a list of all the contracts handed out as various media outlets have reported tens of million of dollars in deals around the country. Neither department has released official numbers detailing these costs. However, NBC News recently reported the cost of holding these children in temporary tent cities is $775 per person per night, compared with $256 per person per night in permanent HHS facilities or $298 at a facility for families.

Secretary Azar set off a firestorm after speaking about the agency's treatment of children in the 100 shelters across the country.

"It is one of the great acts of American generosity and charity, what we are doing for these unaccompanied kids," he said.

The Department of Homeland Security says it's reunited all "eligible" families. Still, more than 700 children remain separated after Thursday's deadline mandating reunification for all families. Bustos, who is a widely popular Democrat in a red district, says she's concerned about how this will all be paid for. HHS is said to be diverting more than $200 million from other parts of the department, including the Ryan White HIV/AIDS Program.

"I don't know where he's coming from, but it seems like an alternate universe," Bustos says. "It shouldn't be coming from public health dollars. Were talking about a quarter of a billion dollars spent unnecessarily."

But the reality is this is the situation the administration has chosen, and the dollars need to roll in from somewhere. Democrats and Republicans alike say they'll impose penalties on HHS if it doesn't become more transparent. Bustos says emergency funding is likely the best choice.

Newsy reached out to both departments for a response to the congresswoman's letter and for details on the concerns she raised. A spokesperson for Homeland Security responded saying they don't comment on congressional correspondence.