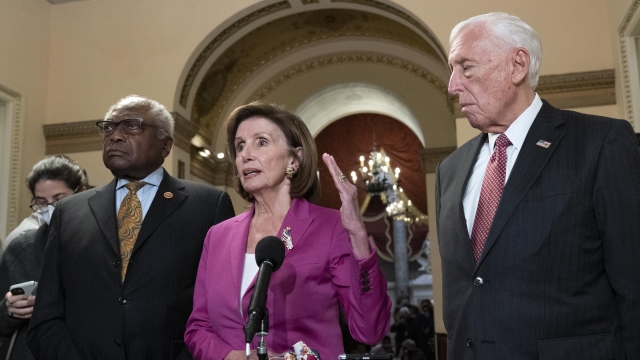 Much of the package's cost would be covered with higher taxes on wealthier Americans and large corporations.

In a bid to hand him a needed victory, leaders still prepared to try pushing an accompanying $1 trillion package of road and other infrastructure projects through the chamber and to his desk. But even the fate of that popular bill, expected to create jobs in every state, was in question.

The scrambled plans cast a fresh pall over a party that's struggled for weeks to take advantage of its control of the White House and Congress by advancing its top priorities. That's been hard, in part because of Democrats' slender majorities, with bitter internal divisions forcing House leaders to miss several self-imposed deadlines for votes.

"Welcome to my world," House Speaker Nancy Pelosi, D-Calif., told reporters, adding, "We are not a lockstep party."

Democratic leaders had hoped to see the House approve both measures Friday, producing twin triumphs for a president and party eager to rebound from this week's deflating off-year elections and show they can govern.

The party's gubernatorial candidates were defeated in Virginia and squeaked through in New Jersey, two blue-leaning states. Democrats can ill afford to seem in disarray a year before midterm elections that could result in Republicans regaining congressional control.

The president and first lady Jill Biden delayed plans to travel Friday evening to their house in Rehoboth Beach, Delaware, so he could try breaking the logjam. He spoke to House leaders, moderates and progressives, said a White House official who described the conversations on condition of anonymity.

Rather than delivering easy approval of the infrastructure bill to give Biden a chance for a victory lap, a group of progressives threatened to vote against it. They've long demanded that the two bills be voted on together to pressure moderates to support the larger, more expansive social measure.

With Democrats able to lose just three votes and prevail in the narrowly divided House, Pelosi said she would press ahead anyway, saying she had a "pretty good feel" for the support.

Pelosi for years has refused to hold votes on bills unless she had near certainty that they would pass to avoid embarrassing defeats.

Democrats' day fell apart when, after hours of talks, a half-dozen moderates insisted they would vote against the sprawling package of health, education, family and climate change initiatives unless the nonpartisan Congressional Budget Office first provided its cost estimate for the measure.

Democratic leaders have said that would take days or more. With Friday's delay and lawmakers' plans to leave town for a week's break, that could mean the budget estimates would be ready by the time a vote is held.

Readjusting the party's timeline for finally passing the $1.85 trillion measure to reflect political reality, Pelosi said that once the CBO figures are provided, "we'll have a Thanksgiving gift for the American people."

In a letter to her colleagues announcing the new voting schedule, she wrote, "The agenda that we are advancing is transformative and historic, hence challenging."

The infrastructure measure cleared the Senate easily in August with bipartisan support, including the backing of Senate Minority Leader Mitch McConnell, R-Ky. The package would provide huge sums for every state for highway, mass transit, broadband, airport, drinking and waste water, power grids and other projects.

But it became a pawn in the long struggle for leverage between Democrats' progressives and moderates. Rep. Pramila Jayapal, D-Wash., who leads the 95-member Congressional Progressive Caucus, said the White House and Congress' nonpartisan Joint Committee on Taxation had provided all the fiscal information lawmakers needed for the broad bill.

"If our six colleagues still want to wait for a CBO score, we would agree to give them that time — after which point we can vote on both bills together," she wrote. That strongly suggested that at least some progressives would vote Friday against the infrastructure bill.

Earlier Friday, President Biden, meeting reporters to tout a strong monthly jobs report, said he would "make some calls" to lawmakers. He said he would ask them to "vote yes on both these bills right now."

House passage of President Biden's larger measure would send it to the Senate, where it would face certain changes and more Democratic drama. That's chiefly because of demands by Sens. Joe Manchin of West Virginia and Kyrsten Sinema of Arizona to contain the measure's costs and curb or drop some of its initiatives.

Pelosi met late Thursday with Hispanic lawmakers wanting the larger measure to go as far as possible in helping immigrants remain in the U.S. Their prospects for bold action are limited by strict Senate rules, though. Rep. Adriano Espaillat, D-N.Y., said Friday that they'd discussed moving on the issue in other bills and considered Pelosi an ally.

Pelosi's strategy seemed focused on passing the most robust social and climate bill possible and leaving it to the Senate to change or drop portions its members won't agree to. Because of Manchin and Sinema, the 2,100-page measure has been slashed to around half its initial $3.5 trillion size.

Republicans oppose the measure as too expensive and damaging to the economy.

The package would provide large numbers of Americans with assistance to pay for health care, raising children and caring for elderly people at home. There would be lower prescription drug costs as Medicare for the first time would be able to negotiate with pharmaceutical companies for lower prices for some drugs, a long-sought Democratic priority.

Much of the package's cost would be covered with higher taxes on wealthier Americans and large corporations.

Manchin has panned the new family leave program, which is expected to provide four weeks of paid time off, less than the 12 weeks once envisioned.

Senators are also likely to strip out a just-added immigration provision that would let 7 million immigrants in the country without legal standing apply for up to two five-year work permits.