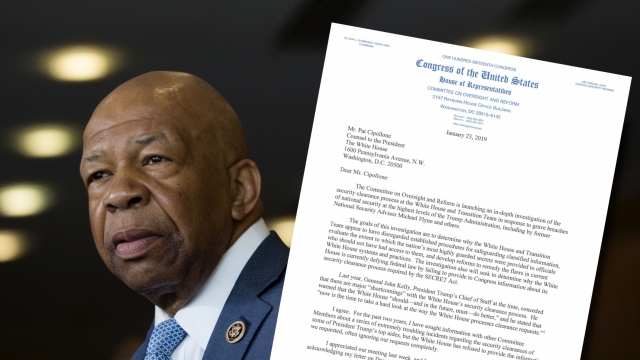 The chairman of the House Oversight Committee sent a letter to the White House requesting documents going back over two years.

Rep. Elijah Cummings, the committee's chairman, sent a letter to the White House on Wednesday outlining a slew of documents lawmakers want to review. Those documents span over two years and are linked to the current administration and the president's transition team.

Some of the current and former staffers the committee is interested in are Michael Flynn, Jared Kushner, K.T. McFarland and Rob Porter.

The committee wants to look at why the White House and transition team "appear to have disregarded" established security procedures. It also hopes to determine who might have had unauthorized access to classified intelligence and what can be done to avoid these problems moving forward.

Concerns about the Trump administration's security clearance process aren't new. Dozens of executive staff members relied on temporary clearances for months, and in February 2018, then-chief of staff John Kelly outlined a list of improvements for the White House's approval process.

The letter gives the White House until Feb. 6 to provide all the requested documents.