House Majority Whip Is Back In Intensive Care 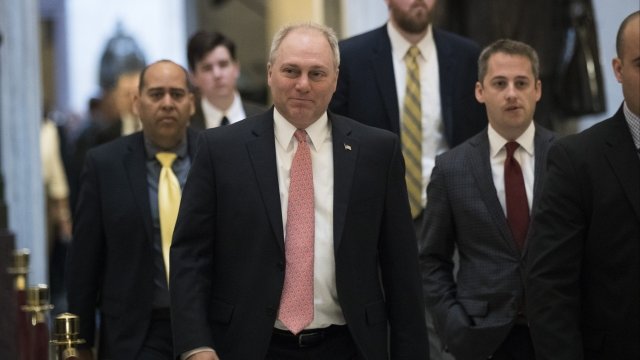 Rep. Steve Scalise was critically injured in a shooting at a baseball field in Alexandria, Virginia, on June 14.

House Majority Whip Steve Scalise is back in the intensive care unit at a hospital in Washington, D.C.

The congressman and five others were wounded in a shooting at a baseball field in Alexandria, Virginia, last month. Police fatally shot the gunman.

Scalise was shot in the hip and required immediate surgery.

The New York Times published an editorial that suggested Palin was responsible for the 2011 shooting of Rep. Gabby Giffords.

His condition steadily improved after several surgeries, and he was transferred out of the ICU nine days after the shooting. Scalise remained in the hospital, though.

According to an update from the hospital, doctors downgraded Scalise's condition from fair to serious because doctors are concerned about infection.