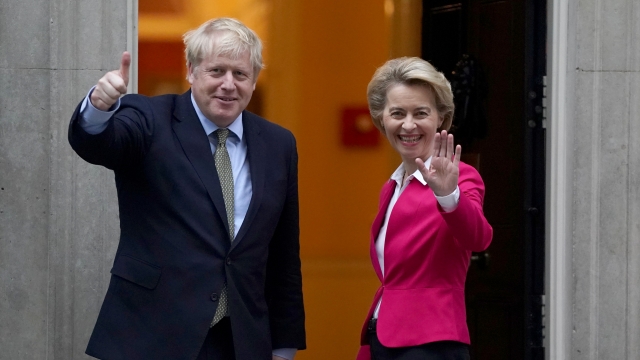 Lawmakers voted 330 to 231 to approve the the European Union (Withdrawal Agreement) Bill that allows the U.K. to leave the EU.

Britain is one step closer to leaving the European Union. On Thursday, lawmakers approved legislation that would let Britain leave the European Union at the end of the month under a Brexit deal agreed to last year.

Lawmakers voted 330 to 231 to approve the the European Union (Withdrawal Agreement) Bill that allows the U.K. to leave on Jan. 31. The legislation is now heading to Parliament's upper chamber for debate. The Brexit bill is expected to become law in coming weeks.

But even then this doesn't end the matter just yet. After Jan. 31, the U.K. will enter what is called a transition period where it will still have to follow EU rules on trade until Dec. 31, 2020. Prime Minister Boris Johnson wants to strike a free trade deal by then, but some say that may require more time.

Johnson met with European Commission President Ursula von der Leyen in London Wednesday. Hours before that meeting, she said it would be "basically impossible" to reach a full agreement by the end of this year. But she said she remains optimistic, despite the difficulties of the breakup.

Brussels is worried the Dec. 31 deadline is not enough and has offered to give London an extension. But Johnson has said the U.K. doesn't need more time and has to break free from EU rules as soon as possible.