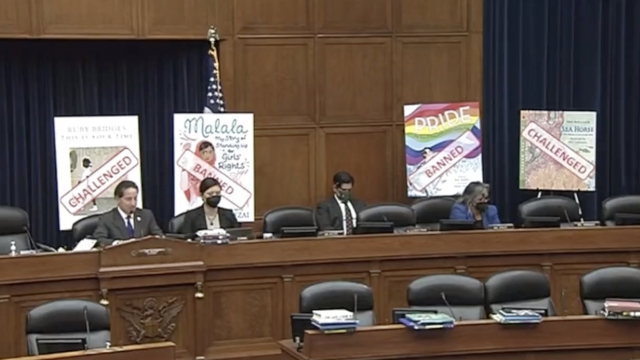 Along with significant action from school boards and parents, legislation on books are rapidly moving through state legislatures across the country.

House Committee on Oversight and Reform

Across the country, some parents are demanding books be pulled from shelves — books that largely deal with race, sexuality and gender.

"When I share my experiences, my story in these books, I share our shared history. Good, bad and ugly," Bridges said.

She was one the first Black students to integrate a southern elementary school. At just 6 years old, flanked by U.S. Marshals, Bridges walked into a New Orleans elementary school over the cries of segregationists.

Bridges was escorted to school every day that year while being called various slurs. She later said she was only frightened by a woman holding a Black baby doll in a coffin.

"So you see, I encourage parents and teachers to be creative without lying of course, because our children deserve the truth," she said. "The truth is pure, the truth is good and we all know the saying: 'The truth shall set us free.'"

Her story is chronicled in a kids book called 'Ruby Bridges Goes to School' and it's been challenged in Tennessee.

"How it leaves the child, it really drops them off in 1960," said Robin Steenman, Moms for Liberty Williamson County, TN Co-Chair. "It shows imagery of just the angry faces, the mean white people yelling and and raising their fists and waiving signs. Did that happen? Yes it did. But do we need to focus on that? Probably not."

U.S. House Representative Rashida Tlaib grew emotional during the hearing while expressing support for the parents and teachers who spoke.

"I'm a mother of two, raising two Muslim boys in our country and it's been very difficult," she said. "Our children, they just simply want to exist as they are. They want to be loved. They want to feel human. You know, there's so much dehumanization happening, even at a young ago. And, you know, they wanna feel like they belong."

Conservatives countered the discussion on book bans in K-12 education with complaints of censorship on college campuses and social media.

"When you look at this issue and you look at some of the censorship that's happening on college campuses, as we heard today ... That kind of censorship, censorship on social media, that is far more dangerous than what we're hearing — I think — from our witnesses today," Rep. Nancy Mace said.

Along with significant action from school boards and parents, legislation on books are rapidly moving through state legislatures across the country.

In Tennessee, a bill has been introduced that would prohibit books that "promote, normalize, support, or address (LGBT) issues or lifestyles."

According to the American Library Association, in 2021 alone, there were over 700 challenges to remove books from schools and public libraries.