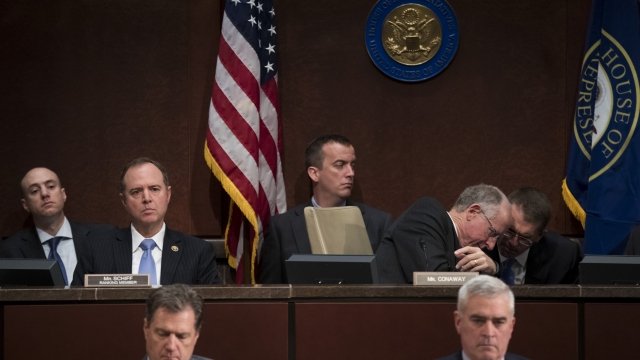 Republicans on the House intelligence committee say they will end their more than yearlong investigation into Russian election interference.

Republicans on the House intelligence committee are ending their investigation into Russian interference in the 2016 presidential election, and they say they found no evidence the Trump campaign colluded with the Russians.

Rep. Mike Conaway said the Republicans on the committee prepared a 150-page report that they'll let Democrats review on Tuesday. He said the committee has ended its interviews after a more than yearlong investigation.

Rep. Adam Schiff threatened to subpoena Corey Lewandowski for not answering questions during his second meeting with the House Intelligence Committee.

The committee's draft report also says that Russia did try to interfere in the 2016 election, but didn't do so to help then-candidate Donald Trump. That's at odds with the U.S. intelligence community's findings but aligns with the president's argument.

Democrats are not expected to be OK with this conclusion. They say there are still people the committee needs to call to testify and claim the Republicans on the committee haven't effectively used their authority to get all pertinent information.

There are still several other investigations into Russian election meddling going on: two in the Senate, one in the House, one at the FBI and, of course, special counsel Robert Mueller's probe.