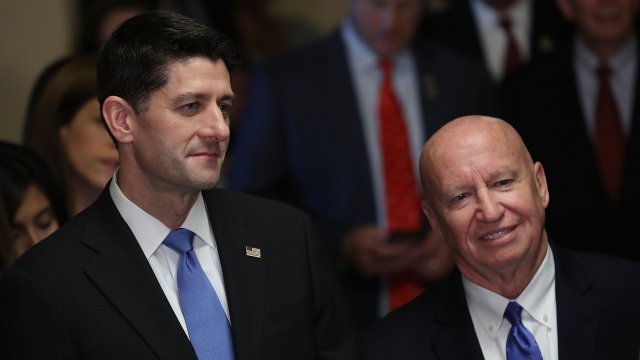 The House passed the Tax Cuts and Jobs Act on Tuesday, but Democrats in the Senate successfully argued the bill violated some pretty obscure rules.

If you remember the headlines, the House passed the Tax Cuts and Jobs Act on Tuesday, but Senate Democrats successfully argued the bill violated some pretty obscure rules.

They related to the Byrd Act, which is supposed to keep the Senate from considering "extraneous" add-ons to reconciliation bills.

The House's version had three procedural blips, but the most notable may have been the bill's name.

House leadership shortened the legislation's name to the Tax Cuts and Jobs Act. But that had no impact on the budget itself, so changing the name violated the Byrd rule. Republicans had to revert to the original, longer title: "An Act to provide for reconciliation pursuant to titles II and V of the concurrent resolution on the budget for fiscal year 2018."

This Is How Trump Could Benefit From The GOP Tax Bill

President Donald Trump has repeatedly said he loses from the bill, but that may not be the case.

The other two violations of the Byrd rule include a provision that let 529 savings accounts help finance home schooling, and another that protected a college in Kentucky from a proposed excise tax on university endowment earnings.

Republicans couldn't push back against the changes because the tax reform bill had to be Byrd-rule compliant for it to pass the Senate with a simple majority.

The Senate did just that in the early hours of Wednesday morning.

Many expected this House revote to be a formality, and the chamber passed it Wednesday 224 to 201.