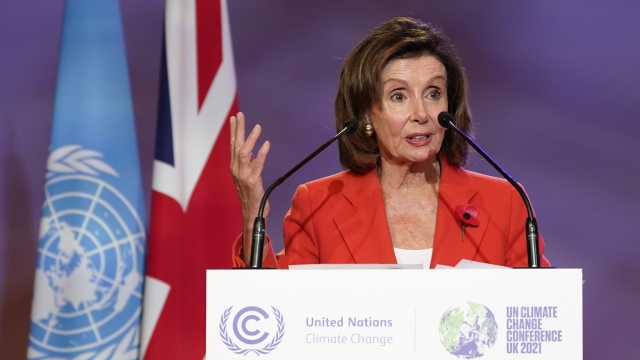 It's Pelosi's first engagement at COP26.

House Speaker Nancy Pelosi represented the delegation of Democrats on Scottish soil, with hope, optimism and togetherness being their theme.

"America is back," Pelosi said. "Together for the planet, for the women, for our children."

It's Pelosi's first engagement at COP26 and her appearance was treated with almost as much excitement as President Obama's Monday.

All eyes, trained on the speaker — a woman now almost as well-known on this side of the pond as she is back home.

Another famous face — Congresswoman Alexandria Ocasio-Cortez — was there. She's vocally supportive of the cause.

"I think the aim is just to increase the commitments that we have here," she said. "The United States is back."

Rep. Brendan Boyle said, "Off the top of my head, I can't think of a conference where you have the president of the United States, a former United States president, the speaker of the House, 20 members of Congress. It shows that we're a world away from where we were four years ago when we had President Trump taking the United States out of the Paris Climate Accord. So, we're all in this. Passing the bipartisan infrastructure bill was step one, and then step two is passing the Build Back Better Act, which actually has so many more of the climate provisions in it."

It's crunch time with the arrival of some of the world's most serious, senior politicians. There are closed-door meetings taking place where they are hammering out details in some of the big deals.

For scientists and activists alike, one of the main aims of COP26 is commitments limiting the increase in global temperature to 1.5 Celsius above pre-industrial levels.

"I'm very encouraged by the enthusiastic embracing of science and engineering and technology," U.K. government chief scientific adviser Patrick Vallance said. "It's very different, actually, from a decade or two decades ago, and the science is at the heart of this meeting, which is great."

A whirlwind first day with the focus now on consensus and the memorable climate-focused commitments that delegates and politicians are currently working to achieve.