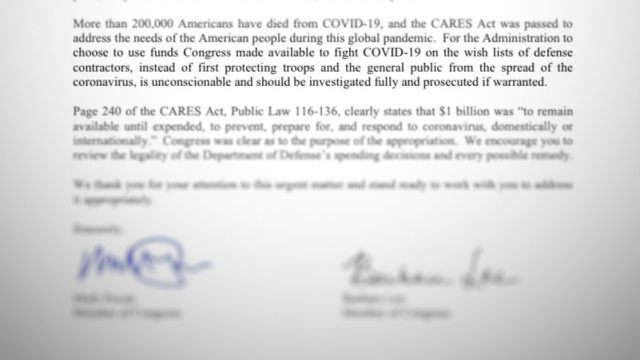 House Democrats are calling for an investigation into whether the Pentagon misused funds meant to combat the coronavirus to pay defense contractors to make non-COVID-related supplies.

Pocan told Newsy he feels the Pentagon must be held accountable for not using funds to protect troops from the virus. In a statement, he added, “Over 200,000 Americans have died, hospitals continue to face shortages of masks and supplies, but the Department of Defense would rather use funds to reward defense contractors.”

Congress passed the Cares Act in March to provide “emergency assistance and health care response for individuals, families, and businesses affected by the 2020 coronavirus pandemic.”

In May the Department of Defense released their Cares Act spending plan ….  detailing where $10.5 billion in emergency funding from the Cares Act was allocated.

Which includes protecting military, civilian employees and their families, safeguarding national security capabilities and supporting the president’s response to the pandemic.

And during a June congressional hearing Undersecretary of Defense for Acquisition and Sustainment Ellen Lord reiterated the need to support the critical needs of defense contractors, or civilian employees, based on their interpretation of the authority granted to them by Congress.

“COVID-19 is shutting down defense manufacturing facilities and production lines, disrupting supply chains and distressing the financial stability of the companies DOD relies on to protect the nation,” Lord said.

As seen in these reports released in June and July, the Pentagon allocated millions to various companies to “help sustain defense-critical workforce capabilities in body armor, aircraft manufacturing, and shipbuilding.”

But in July the House of Representatives disagreed with Defense's stance, stating “the committee's expectation was that the department would address the need for PPE industrial capacity rather than execute the funding for the DIB.”

And in recent weeks the country’s leading health experts, like director of the Centers for Disease Control and Prevention Robert Redfield, testified before the Senate and pleaded for $6 billion to distribute vaccines in 2021.

"I will argue the thing I was most concerned of and my subject matter experts who actually generated the letter, which I signed, was that the worst thing that could happen is that we have the vaccine delivered and we still aren’t ready to distribute,” Redfield said.

Newsy reached out to the Pentagon for comment…and spokesperson Jessica Maxwell said the Department of Defense has been transparent about funding based on how it interprets the power granted by Congress. Terace Garnier. Newsy. the Pentagon.