How 2014's Midterms Became The Most Expensive Ever 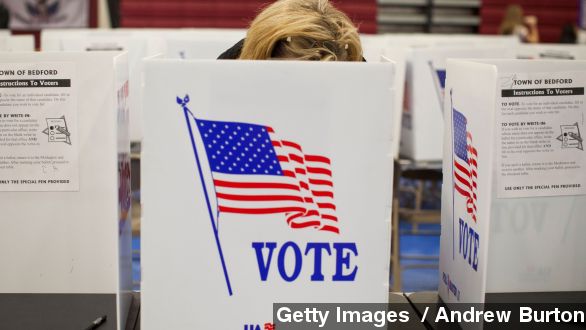 Due to a surge in outside spending, the $3.67 billion election is expected to break the record for the costliest midterm in the nation's history.

Tuesday is expected to go down as the most expensive midterm in the nation's history.

The price tag? Nearly $3.7 billion, according to the non-partisan Center for Responsive Politics. Most of that — about $2.7 billion — was spent by candidates and their parties, with another $900 million from outside groups.

Although the 2010 midterms cost about the same, outside spending that cycle accounted only for $309 million. Now, with PACs and Super-PACs now an entrenched part of campaign finance, outside spending is at record highs. (Video via Voice of America)

And it's played a big role in North Carolina in the matchup between Democratic Sen. Kay Hagan and her Republican challenger Thom Tillis. Total spending easily passed the $100 million mark. (Video via Kay Hagan for U.S. Senate, Thom Tillis for U.S. Senate)

And Senate races in other key states aren't far behind. A handful of races will decide who controls the Senate and could give Republicans control of both chambers.

As in previous elections, Republican candidates, their party committees and outside groups have raised more money than their Democratic counterparts.

But among individuals writing massive checks this year, there's been a shift. The Sunlight Foundation reports three of the five biggest donors are liberal billionaires.

None of these numbers, however, take into account unreported campaign cash, which the Center for Responsive Politics estimates is well over $100 million this year.

Thanks to the Supreme Court's ruling in the 2010 Citizens United case, politically oriented nonprofits can raise and spend unlimited amounts of money without disclosing their finances to the Federal Election Commission.

By law, these groups are supposed to operate independently of the candidates and their parties, but there's no arguing many are closely linked to the candidates they support.

Their influence is heavily felt on television. The Wesleyan Media Project reports a quarter of the $1.2 billion spent in TV ads this cycle was paid for with so-called dark money.

Those ads, known as issue ads, can get away with keeping their donors secret as long as they don't directly ask you to vote for or against a candidate.

Bottom line is, if there's one word to describe this year's midterms, it's "expensive." But will the surge in spending make a difference?

A recent survey from NBC and The Wall Street Journal suggests political ads and get-out-the-vote efforts might have fallen on deaf ears.