How 3 College Freshmen Are Taking Over The NCAA And NBA 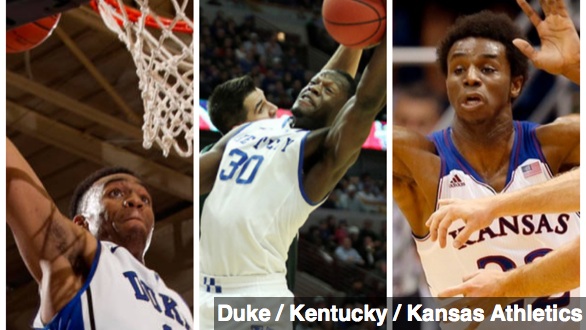 The NCAA might have the strongest freshman class college basketball has ever seen, and everyone is taking notice.

In 2005 the NCAA instituted the one-and-done rule forcing high school basketball standouts to go to college for one year before entering the draft. As a result, the NCAA may have the strongest freshman class college basketball has ever seen.

Andrew Wiggins, Jabari Parker and Julius Randle are all ranked as the top players in college basketball, all on nationally ranked teams, and they're all freshman. (Via Ballislife)

"Julius Randle is a bull in a china shop."

"Andrew Wiggins is a multitalented superstar."

" ... certainly headed to be the next superstar to wear a Duke uniform." (Via ESPN)

All three of the freshman phenoms played last night in the Champions Classic, and by all accounts, they did not disappoint.

Superstar stat lines to go along with what Bleacher Report calls "the best display of talent on one night under one roof in the history of college basketball." (Via Bleacher Report)

Randle puts Kentucky on his back in the second half, scoring 27 points and yanking down 13 rebounds. (Via University of Kentucky)

In similar fashion, Andrew Wiggins scored 16 of his 22 points in the second half while pulling down eight rebounds. (Via University of Kansas)

And Jabari Parker, the only one of the three to get a win, scored 27 with nine rebounds. (Via Duke University)

And as excited as the fans at KU, Kentucky and Duke must be, no one is clapping louder than the execs from the NCAA.

With football season in full swing and the Super Bowl not until February, the NFL and college football seasons have, in recent years, eclipsed college basketball until March Madness. (Via CBS)

'But ESPN's Michael Wilbon writes games like the two on Tuesday can bring college basketball out of the shadows. "You tune in to watch these three players … and you'll inevitably discover other players and teams to fall in love with. … Clearly this is something to savor ... no matter what else is going on in the world of sports." (Via ESPN)

Along with the huge impact these freshmen could have on the college game, they will soon hold the hopes and dreams of NBA franchises in their 18-year-old hands.

And Jay Bilas adds, "This place tonight is going to look like the green room at the NBA draft." (Via ESPN)

Sixty-eight different NBA scouts were on hand to watch the talent on display in Chicago. There are only 30 teams. (Via Reddit)

But we're thinking they're just that good. Despite there being a whole season left to play, ESPN's Chad Ford's mock draft placed all three freshmen in the top five of the 2014 draft class.