Moms Helping Moms: How Mothers Reunited A Migrant Family In A Day 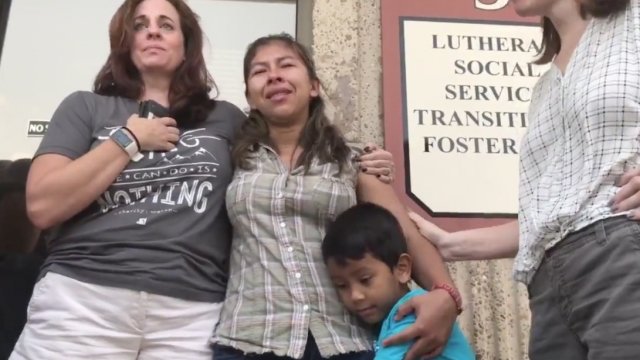 A Texas mom tells Newsy about driving a migrant mother around for 24 hours to help her find her son.

Dionne Ukleja is a volunteer for Immigrant Families Together, a national network of American moms who are helping immigrant mothers reunite with their kids. To date, the group has raised more than $450,000, covered the bonds of 11 detained women, and helped nine of them reunify with their children.

"We're all mothers, and we get how heartbreaking it is even though we can't imagine it. It's just heartbreaking at the thought. We're able to capitalize on everybody's strengths and come up with these amazing solutions. And figuring out those important questions that are just going to help get the moms from one place to the next as fast as possible," Ukleja told Newsy.

One mother who needed just that is Lilian Martinez. The Guatemalan migrant was held in Arizona on a $25,000 bond after illegally crossing the border in May. And she had been separated from her 5-year-old son as a result of the administration's zero-tolerance policy.

Immigrant Families Together raised $50,000 for Martinez, got her out of detention in mid-July and helped her travel from Arizona to Houston, where she was told her son was located. But once in Houston, she learned that her son was actually held in Corpus Christi, Texas, 200 miles away. Ukleja and a fellow organizer volunteered to drive her there.

The Trump administration says the children are ineligible to be reunited.

"And now suddenly we're on a road trip with a third person that put literally all of her trust into us, which was humbling," Ukleja said.

But when they got to the children's shelter in Corpus Christi, nobody would receive them. Even worse, the facility's supervisor called the police on them. When Martinez was eventually allowed to get inside the building, she came back with bad news.

"They said he's not there and they don't know where he is. And so that was basically a dead end. It could have been very simple, but systematically it is set up to not be helpful or easy or kind to the parent. And that is the most absurd thing. One, to witness as an American. Secondly, heartbreaking as a mother and maddening," Ukleja explained.

They were back to square one. And because it was the weekend, their many phone calls to the caseworker were useless at first, until someone finally called back to say that the child was with a nearby foster family and ready to be reunited with his mom. But there was one last hoop to go through: convincing local officials to let an attorney in the reunion room.

The officials eventually allowed a lawyer to accompany her. And at last, for the first time in two months, the 24-year-old mother got to hug her child.

"There was just a moment of her hugging her son and seeing her with this tiny little boy that we had been talking about and searching for 24 hours. It was just a moment of relief for that second, and just gratitude and happiness and being able to see them connected. It was life. It was the most life-changing day for me, other than the time that I had my own children," Ukleja said.