How Abortion Became A Focus Of Midterm Elections 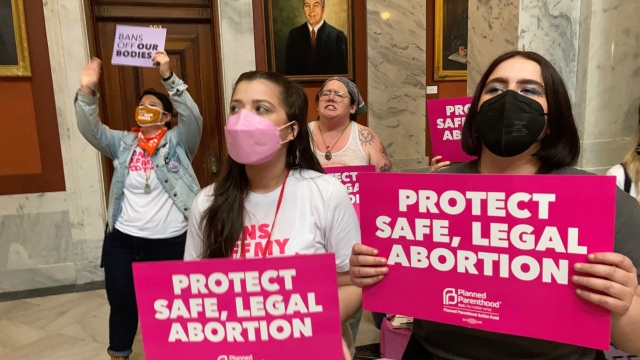 After the Supreme Court overturned Roe v. Wade in June, the right to an abortion has been a state issue, putting it on the midterm ballots.

Abortion is one topic that is seemingly unavoidable this midterm.

It started with the Supreme Court’s decision to overturn Roe. V. Wade in June, which put the future of abortion in the hands of state legislatures and led to some states almost immediately banning or restricting the procedure.

The uncertainty of it all led to campaign ads discussing the issue.

Even in states with no ban like Virginia and New York, the future of abortion became a flashpoint.

“When we woke up the day after the Dobbs decision, the law in New York was exactly the same as it was the day before, and I'm not going to change that," said Lee Zeldin, Republican candidate for New York governor.

"You know why nothing changed the day after the Dobbs decision? It's because I'm the governor of the state of New York, and he's not," New York Democratic Gov. Kathy Hochul said.

In the weeks following the decision, a lot has happened.

South Carolina Republican Sen. Lindsey Graham proposed a 15-week federal ban on abortion, with exceptions for rape, incest or the “life of the mother."

Voters in Kansas immediately rejected an amendment that would have gotten rid of the right to an abortion.

President Joe Biden, hoping to persuade voters, now has promised to codify the right to abortion if the Democrats maintain control of Congress.

Montana Is The Latest State With Abortion On The Ballot

Abortion is on the ballot in many states, both directly and indirectly. Montana is the latest state to be considered an abortion island.

In the days ahead of the election, anti-abortion rights groups like the Susan B. Anthony List have been going door to door putting their focus on limitations. Their aim is in battleground states like Georgia, where GOP Senate Nominee Herschel Walker made waves when two women accused of him of paying for an abortion.

"You know where the candidates stand on this issue and how they'll vote, and I think that's the most important piece is how they will vote going forward," said Kaitlin Makuski, political coordinator of Susan B. Anthony List.

On the flip side, pro-abortion rights groups like National Abortion Rights Action League, or NARAL, are also working to keep the issue top of mind in many of those same states.

"People still understand who is responsible for taking away a constitutional right they enjoyed for 50 years, and they understand that there's more than one thing that they need to consider in their vote," said Angela Vasquez-Giroux, president of communications and research at NARAL.

But for years, abortion never polled as being a high-priority issue for voters. Many Americans have been in a gray area on its legality and restrictions, but since June, pollsters say there has been some slight shifts in that view.

“After the decision, when you're talking about a blanket ban or total opposition, public opinion data shows that most Americans are certainly opposed to that," said Mallory Newall, vice president of market research company IPSOS.

Newall says voters seem to believe Democrats have a better grasp on handling abortion, but the topic still isn’t top of mind for most.

"The question becomes, is this going to be a galvanizing issue for people in the midterms, and if so, who?" Newall said.