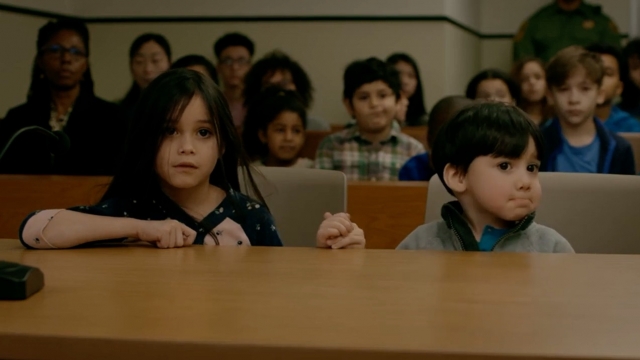 Across all genres, immigration is one of this year's biggest trends in television — but are the storylines accurate?

Netflix / "Orange Is The New Black"

"Good afternoon, ladies and gentleman. My name is Judge Christine Hollister and we're sitting in the immigration court in Litchfield, New York."

"Orange Is The New Black" is known for its timely and jarringly emotional criticisms of the U.S. legal system. Tackling immigration was inevitable for the show, but beyond the Netflix drama, the issue has also played out on sitcoms like NBC's "Superstore," political dramas like "Madam Secretary," and even fantasies like Amazon's "Carnival Row."

As immigration is one of the most contentious and complex political issues of today, we wanted to know: Are these portrayals accurate or pure entertainment?

To answer that question, let's go back to that scene from "Orange Is The New Black."

"Let the record show the respondents are present in court, but without an attorney."

"I think they had kind of recreated the physical space relatively accurately, which is that it is sort of a courtroom setting, but not sort of the opulence spacious ones that you would generally be. ...And they also showed that the courtroom is pretty packed, which is what we see, especially these days where it's just overflowing with people."

Ashley Tabaddor, President of the National Association of Immigration Judges, knows what the inside of an immigration court looks like. And she told Newsy that "Orange Is The New Black" got a lot of things right: the space and fullness of the court, the fact that children aren't typically represented by attorneys, and the fact that immigration judges are part of the Department of Justice.

Tabaddor adds that some technicalities are still inaccurate — like the exchange between the judge and the children, and the scene's lack of an interpreter.

Overall, however, she says the scene conveys more of a truncated commentary.

"People don't fully appreciate the complexities, but they just...they can tell that something's wrong with the system, right? And I think that's what the scene was trying to convey is that something is deeply wrong with this system. This is just purely un-American that we would have, in the United States, a court system that on its face is so transparently indefensible. And so while some of the technicalities are certainly incorrect, and our judges do the best they can to try to bring as much fairness as possible. Structurally, the court system is indefensible. And I think if you're an entertainer, or you're trying to make this point in a minute, this is sort of what happens."

We're not the first people to question the accuracy of immigration storylines on television.

Last year, the Norman Lear Center partnered with the immigrant advocacy group Define American to publish this study on the very topic — analyzing 47 TV shows between 2017 and 2018. Phrases like "deportation," "ICE" and "undocumented" were the most common terms tracked in the research.

"We are currently working on the 2019 report. And we're analyzing any scripted narrative TV portrayal of immigrants or immigration issues that aired between August 2018 and July 2019. ...We don't have any results yet, but just anecdotally, there's some great immigration story lines out there from the past year. A lot of the most in-depth immigration content comes from streaming shows."

Adam Rogers is the project manager for immigration research projects at the Norman Lear Center, and he says this year's most in-depth immigration storylines came from streaming shows like Hulu's "Ramy" or Netflix's "Orange Is The New Black."

"'That's so important, because in reality, we largely haven't been allowed to see inside these immigrant detention centers. So for 'Madam Secretary' to take the real life descriptions of what it's actually like in inside and what the conditions really are inside these immigrant detention centers, and to kind of illustrate it and provide visuals for almost 7 million viewers on CBS ... it's very powerful."

Like "Orange Is The New Black," "Madam Secretary's" depiction of immigration issues is emotionally driven in favor of the immigrant characters.

For some viewers, that can indicate political leanings and possible bias, but Rogers says partisanship in fiction is difficult to track.

"To us, immigration policy isn't something that cuts down the typical liberal-conservative binary. And so because we don't see immigration as a partisan issue, we can't really code for that."

Rogers says the forthcoming update on the immigration study will include a survey on the impact of immigration storylines on audience's political views.

Until that study comes out, television creators from political dramas, police procedurals, sitcoms and even fantasy thrillers are banking on their abilities to at least start conversations about the heavy topic.

During San Diego Comic-Con, we talked to Marc Guggenheim, one of the writers behind "Carnival Row" to get his thoughts on the immigration and refugee-focused storylines of the show.

"We're basically dealing with the fantasy version of what's happening in the world right now. I mean, I think if you'd look to Paris, that city is being flooded by refugees from the war in Syria, much the same way our fictional city of the Burgh is being flooded by refugees from the fictional war in Anoun. So we are holding up our own version of a mirror to what's going on in the world. But at the same time, we always take pains not to make it a polemic. Because, I'm a big believer that television obviously needs to be entertaining. But also, just by raising these issues, you're hopefully creating conversation. You don't have to tell the audience what to think in those conversations."