How Artists Continue To Fuel The Racial Justice Movement 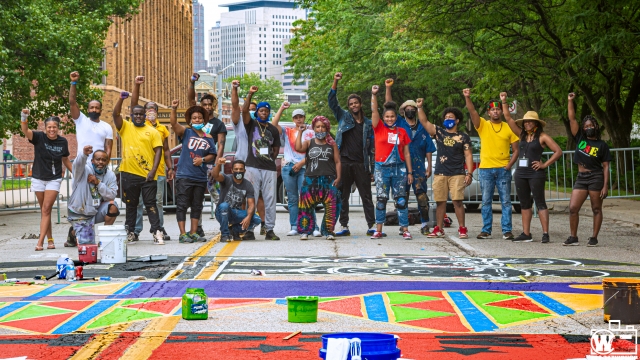 As widespread interest in the racial justice movement began to fade, artists used their work to remind the nation.

Throughout American history, be it paintings, music or poetry …

"We step out of the shade, unafraid, the new dawn blooms,' said poet Amanda Gorman.

Art has served as a clarion call for justice. So as widespread interest about movements like Black Lives Matter and George Floyd began to fade, Corinne Basabe's team decided to remind the country using art.

"A billboard is something you can't ignore; it holds your gaze," said Basabe, chair of the George Floyd Justice Billboard Campaign.

"The trouble with movies is that they move, and conversely, the great thing about painting is that it freezes time," noted artist Don Perlis.

Perlis is the Brooklyn artist behind the billboard. He has painted social injustices for decades.

"We were apprehensive because of that, like I said, because of the subject matter, as well as me being a White man. The only negative feedback were actually for a couple of billboard companies in Minneapolis," he said.

Perlis says the companies refused to run the billboard, deeming its imagery too violent.

"It disturbs me that we quickly want to make things comfortable again and that we don't want to look at it. I think we should be looking at it," said Basabe.

As the art of racial justice blanketed the nation in 2020, admiration and rejection followed.

"The words 'All Lives Matter' sprayed over 'I can’t breathe,'" read a news reporter.

In D.C., art that covered plywood, doused with red paint. In Indianapolis, 18 artists came together to paint Black Lives Matter on the street, each creating a separate letter.

Those images also splattered with paint.

"Honestly, I knew it was going to happen. But it still broke my heart. Because you wish the best of people, even though you expect the worst," said artist Jarrod Dortch.

"It was the fact that you disdain us so much. It bothers you. ... You didn't have to look at it. You don't have to be a part of it; you never have to come on the street," said Nora.

"Once you're in that space where you're wanting to forget the history, if you're reminded of it in any way, you know, that's going to kind of cause some type of negative response or reaction," said Barbara-Shae Jackson of the University of Alabama.

Using a collection of Black art from the University of Alabama, Barbara-Shae Jackson studied some White and Black participants' responses to the pieces, discovering people don't always see the art or each other the same way.

"Art has the innate ability to enact some type of response, a physiological response. And sometimes it inspires people, but sometimes it engenders anger," she said.

But when it inspires, there's no limit to what happens next. Perlis' Floyd found its way to billboards operated by other companies across the country. Recently, some of the Indianapolis artists were asked to display more of their work at the local children's museum.

And some of those plywood pieces, similar to what you see behind me here in D.C., are now headed to their own gallery across town, thanks to Oxford Properties, a Canadian-based property company. Some of the ones behind me are headed to the Smithsonian, preserving the images and message for a little longer. Amber Strong,  Newsy, Washington.