How Cities Are Using Trees To Combat Climate Change 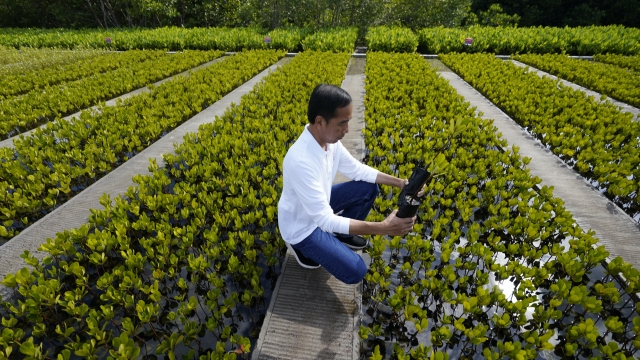 A recently published study of 78 countries found about half of the trees were experiencing climate conditions beyond their limits.

To wrap up an international meeting in Bali, world leaders planted hope for the future in the form of new trees.

Increased temperatures from global warming and its related calamities — like drought, intense storms, wind, flooding and wildfires — are taking a toll on Earth's trees.

World In Crisis A Grim Backdrop For U.N. Climate Talks

Envoys from around the globe gathered Sunday at the COP27 U.N. Climate Summit.

David Nowak is a retired researcher with the U.S. Forest Service, and he says millions of Americans are experiencing tree decline in their neighborhoods right now.

"The problem is these extreme swings of too much water, too little water, too much wind and storm intensities that are going to cause these rapid changes," he said.

A recently published study of 78 countries found about half of the trees were experiencing climate conditions beyond their limits. Researchers concluded that climate change "threatens the health and survival of urban trees and the various benefits they deliver" to city dwellers.

Trees don't only provide benefits like shade to help cool the air and ground but they also help city life by removing air pollution, assisting in flood control, and improving mental health by lowering stress levels.

Biden Says Climate Efforts 'More Urgent Than Ever' At Summit

In Chicago, the city aims to plant 75,000 trees over the next five years. Mayor Lori Lightfoot has pledged to pay special attention to poorer neighborhoods that have been shortchanged in city-provided landscaping over the years.

In Seattle, a string of summers over the past decade have brought record-breaking heat to the region. A government report says the city lost about 1.7% of its tree canopy between 2016 and 2021, while the population has grown by 8%. In part, officials are blaming climate change.

While cities can plant more trees, the trick is to find the types that can survive — and thrive — in a changing climate.

In Bellevue, Washington, the city is growing sequoia trees — a species not native to the Pacific Northwest, but able to battle drought and pests.

"We're starting to plant more of these trees in our open space because they are drought tolerant," Forest Management supervisor Rick Bailey said.

Climate change often makes trees more vulnerable to unwanted types of insects and disease but researchers from the Morton Arboretum in suburban Chicago completed threat assessments for all 881 native species in the contiguous United States.

They found at least one in nine is threatened by extinction.