How City Design Can Cool Down Your Neighborhood 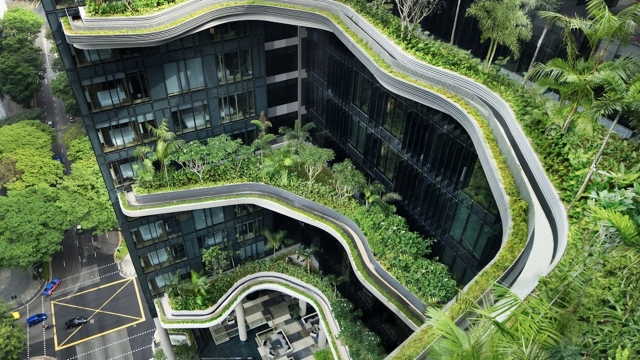 Data from the Environmental Protection Agency shows that heat waves are becoming more frequent in the U.S. In the 60s, there was an average of two heat waves a year. During the 2010s, that went up to six per year.

The National Weather Service predicts July, August and September of this year will be hotter than normal. June has already set the stage for a scorcher. There was a record-breaking heat wave in the Midwest and the Southeast, impacting over 60 million Americans.

It’s not just happening in the U.S. Japan is experiencing the worst heatwave it’s seen since 1875. Officials told residents to use less electricity and to ration air conditioning to help combat power shortages. In Europe, Rome tied its hottest temperature on record and several other cities hit records as well.

So, how can we help ease the effects of extreme heat as it becomes something we deal with on the regular?

You might not realize it but heat waves can be shaped, in part, by things like urban planning and land use.

Ladd Keith, assistant professor of planning at the University of Arizona, co-wrote a report on different solutions that was published by the American Planning Association. He explained that designing cities to help combat heat is a fairly new concept.

"We did a literature review of research on extreme heat that found that 60% of the research on heat planning and heat governance processes have all been written within the last five years," Keith said.

On the heat mitigation front, the goal is to cool down cities, and if you live in a big one, you might have seen some of these efforts at work.

Buildings can also be arranged in a certain pattern to bring temperatures down. The different dimensions and amount of space between buildings can allow more air to flow through and cool things down a bit.

In addition to that, shade structures could be added throughout communities. The EPA says shaded surfaces can be up 45 degrees cooler.

Greenery is a good method for cooling too. Let’s look at Singapore: It started its “garden city” plan in 1967 with intensive tree-planting and adding new parks. As the city grew and the buildings were taller, they focused on creating “sky gardens,” adding greenery all over the buildings.

Singapore has 240 acres of skyrise greenery, and it plans to double that by 2030. The thing is, for new buildings, adding a certain amount of greenery is a required policy to help them reach their goals.

U.S. cities like Washington D.C., New York, Philadelphia and Chicago offer incentives for installing green roofs. Last year a bill was introduced in the House by Representative Nydia Velazquez that would make the Department of Energy establish a grant program to build green roofs on public schools.

Painting roofs and roads lighter colors can also help reflect more solar energy away from the cities. NASA research found that a white roof could be 42 degrees cooler than your normal black roof on the hottest day of summer in New York City.

Through New York’s Cool Roofs initiative, as of 2018, the city painted more than 5 million square feet of its roofs with a reflective coating.

Los Angeles had a similar idea in mind. They implemented a pilot program where they painted their roads with white paint, and it decreased the temperature by as much as 23 degrees.

"Those pilot projects when they're evaluated are incredibly helpful because they kind of point us in the right direction to understand where to put the public investments, the public money in the future, and how to really reduce the urban heat island effect," Keith said. "And so, I think we're in the early days of seeing cities really taking seriously the need to mitigate heat and in cities and towns."

One study found that the combination of adding more green space and reflective materials could offset the projected increase of heat-related deaths in Philadelphia Atlanta and Phoenix by 2050. Right now, heat is the number one weather-related killer in the U.S.

We’ve seen different cities try out these heat mitigation efforts but other cities are taking the heat management route, which is about preparing for and responding to extreme heat.

Heat management involves things like educating the public on the dangers of heat, creating a heat action plan that includes setting up cooling centers and assistance programs to help make indoor cooling accessible for everyone.

"Formerly red lines neighborhoods or communities that have been disinvested in over time that are often lower income or minority population, are often much hotter than their richer counterparts," Keith said. "So that's something to consider, too, is that as we strategize how to address heat risk in communities as making sure that we're focusing on the communities that are most at risk."

Getting funding for these projects is still a work in progress, but planners say they hope to see a shift from using public investment to getting more funding from larger government agencies as heat continues to be a pressing issue.