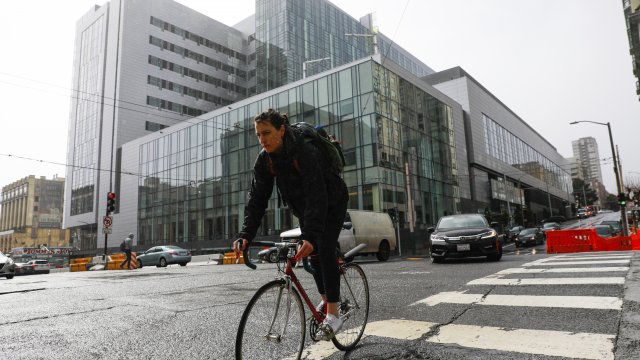 As part of "Operation: Earth," Newsy's "In The Loop" dives into how we can solve environmental issues. Today: how biking can impact emission levels.

Continuing the "In The Loop" Earth week series, Christian Bryant unpacks problems and potential solutions for the planet as part of "Operation: Earth."

One of the biggest environmental issues out there is emissions. The U.S. has a goal of reducing greenhouse gas emissions by 50% by 2030, but where are most of our current emissions coming from?

EPA data from a 2021 study shows that transportation is the biggest source of pollution in the U.S., and regular cars are responsible for nearly 60% of those transportation emissions. That's for a few different reasons: Many American cities are built for drivers, they have limited or unreliable public transportation and they often don’t have a lot of bike lanes.

When looking at the design of cities, about 75% of the residential land in most U.S. cities is zoned for only single-family homes, but because of this set up, there are a lot of suburbs where everything is spread out, making a car a necessity to get around.

But even without public transportation, there is one way to cut back on emissions and get around on your own: biking. Now, not every city has the best bike network, but we've seen more improvements over the last decade.

A report from the League of American Bicyclists shows that among seven cities that expanded their bike lane mileage by 50% between 2007 and 2014, the amount of bike riders doubled, and risk of death and serious injury was cut in half.

"Change the striping to make the lanes narrower so people go 15 or 20 instead of 25 or 30, which makes them, you know, five times less likely to kill a pedestrian," Speck said. "Reshape the lanes so that perhaps the parking comes off the curb and creates a zone between the parking in the curb, where bicyclists can bike protected. That's called a cycle track or a protected bike lane. Reduce the number of driving lanes."

Cities like Copenhagen, Oslo and Amsterdam have created models for best biking practices. A study from the European Commission looked at seven European cities and found that if someone switches one trip per day from driving to bike riding, they reduce their carbon footprint by 0.5 tons a year. Compared to EPA data, regular cars in the U.S. emit 4.6 metric tons of carbon dioxide each year.

"The experience in Europe started earlier than ours, and so they've got a leg up on us, but there's no reason why we can't do the same thing," Speck said. "Often in cities, I talk about cycling and someone stands up and says, 'But we're not Amsterdam.' 40 years ago, Amsterdam was not Amsterdam. It was as car dependent and choking in traffic as the typical American city."

In the Netherlands, biking was popular before World War II, but there was a spike in car ownership in the 50s and 60s. Then, in the 70s after a sudden rise in car accidents involving children along with rising gas prices, citizens pushed to get cars off the road. This led to the bike-friendly cities they have today.

Here in the U.S. experts say there could be more incentives and less investment in road infrastructure to help get more people biking.

A few states are offering different incentive programs. California has dedicated $10 million to helping people purchase e-bikes starting in July. In Washington, Gov. Jay Inslee proposed a $1,000 rebate for zero-emission motorcycles and e-bikes, and bills in the New York State Assembly and State Senate would offer up to $1,100 cash back on e-bike purchases.

Nationally, there was a tax credit for e-bikes proposed in the Build Back Better bill that didn't pass, but there are other bills going through Congress to support e-bikes.

In the infrastructure bill that passed last year, $110 billion was given to improving roads and bridges, which could lead to widening roads, while only $39 billion in new investment was given to public transit.

"When you have a congested system and you add lanes to it, you actually are removing the impediment that was keeping some people from driving in congested road networks," Speck said. "The principal constraint to driving is congestion, so you take the congestion away, you just generate more drivers, more people than make the choice to not take rail or bus or bike."