How Congress Rolled Back Wall St. Reforms — In 3 Easy Steps 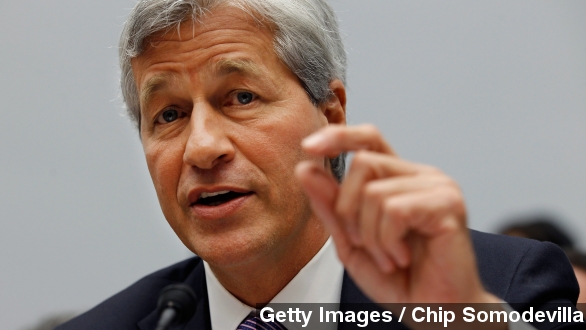 Citigroup wrote a bill, and a House Republican tucked it into the must-pass spending bill. Then President Obama and JPMorgan's CEO made a few calls.

"It is an indisputable fact that one of the most significant contributors to our economic downturn was a unraveling of major financial institutions and the lack of adequate regulatory structures to prevent abuse and excess," President Obama said from The White House in 2009.

It's been five years since widely-popular reforms came to Wall Street, meant to clean up a mess that helped cause 2008's financial crash.

But Saturday's midnight hour passage of a spending bill that avoids a government shutdown also rolled back key parts of the Dodd-Frank reform package — without any real debate and with a lot of help from Wall Street itself. Here's how it happened. (Video via C-SPAN)

Big banks have been trying to get this Wall-Street-friendly amendment passed in some form for a couple years now. And this weekend's last-minute spending bill was a golden opportunity.

This amendment pulls back regulation on several different types of trading, including the risky derivatives trading we heard so much about after the financial crash.

But here's where it gets interesting: 70 lines of the 85-line bill reflect recommendations from Citigroup, which might be the most influential bank on Capitol Hill. And two crucial paragraphs "were copied nearly word for word."

2. Slip the amendment into a must-pass spending bill

This is what happens when Congress procrastinates.

"The Senate floor, where lawmakers must pass at least a temporary funding bill, then a procedural vote on the trillion-dollar plus bill at about 1 a.m," Fox News reported.

Nobody wanted a government shutdown this year, so, already technically past its deadline, the Senate didn't have a lot of options late Saturday when it went to vote on the huge spending bill the Republican-controlled House sent over. That 1,600-page bill included the Citgroup amendment.

Attached to the bill by this lawmaker, Kansas Rep. Kevin Yoder, who said the legislation would help everyday Americans get affordable loans.

Though the amendment's opponents say this.

"This provision, that puts taxpayers right back on the hook for bailing out big banks," Sen. Elizabeth Warren said on C-SPAN.

"We went to work and we started calling them. And some of them had already been contacted by either Jamie Dimon or by the president of the United States telling them to vote for the bill," Rep. Waters said on MSNBC.

You probably know this guy.

If you're unfamiliar with Jamie Dimon, he's the president and CEO of another big bank, JPMorgan Chase.

The bank has had some legal troubles under his watch, paying out big settlements for violating securities laws.

Dimon's support makes sense. But why was the president making calls to repeal a key part of his signature financial reform law? Again, this is what happens when Congress procrastinates.

"The President does not support that provision.  But on balance, the President does believe that this compromise proposal is worthy of his support," White House spokesman Josh Earnest said.