How Could The Monarchy Change Under King Charles III? 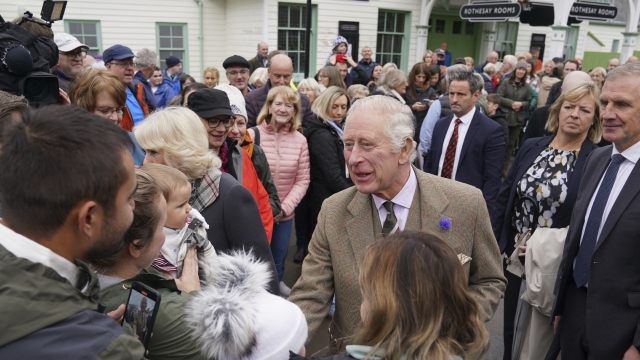 What changes might be made under a new king?

After 70 years the United Kingdom has a new monarch — King Charles III.

But the mailboxes, postage stamps, currency, royal attire and the late queen's image are still woven into the fabric of everyday life in the United Kingdom. So, what will change under a new monarch? The national anthem, for one.

"God Save the King," was edited in immediately after Queen Elizabeth II passed. Other shifts will take longer.

But other transformative changes may be on the way, according to Royal Commentator Hilary Fordwich.

"He said that he wants a slimmed down or a streamlined monarchy," said Fordwich.

Last year U.K. taxpayers paid more than $95 million into the monarchy's Sovereign Grant which funds the royals' duties, but it's a harder sell during difficult economic times.

"He feels people's pain. He's been around the nation. So that streamlining and slimming down is because he recognizes the cost," said Fordwich.

Numbers from Brand Finance show the royals can help bring in more than $2 billion to the U.K. economy annually through tourism.

The monarch's realm could shrink too. Some Commonwealth countries want to become republics and remove Charles as their head of state.

Royal commentators say another noticeable change may be the new king's level of involvement in politics. Charles has on occasion weighed in on hot-button issues, something his mother avoided.

In his first address Charles appeared to acknowledge this.

"My life will of course change as I take up my new responsibilities," said Charles.

But other royal experts believe King Charles may still advocate for some causes like the environment, an issue dear to him.

And what royal experts say is yet to be known, as if the king can match the popularity of his late mother.

"The monarchy will only survive so long as it commands a broad base of popular support," said Owens.

Elizabeth had that support. A YouGov poll from earlier this year found 81% of Brits said they had a positive view of the queen.

Anna Whitelock is a professor of the history of monarchy at city at the University of London.

"She was kind of a stabilizer for the U.K., and she was also a good argument for keeping a United Kingdom — without her, do people feel like there's more of a license to re-examine what identity should be?" said Whitelock.

Royal experts say Charles still has a bit more work to do to build his popularity in the United Kingdom.

A poll in May found just 54% of people said they had a positive opinion of him, a figure that ticked up after Elizabeth's passing with 63% now saying they think Charles will do a good job as head of the monarchy. But opinions could shift the opposite way too. 67% of Brits still say the U.K. should keep the monarchy, but among young adults one third say it should be replaced by an elected head of state. Charles ability to win over a younger generation, skeptical of royalty, could determine the monarchy's success going forward.