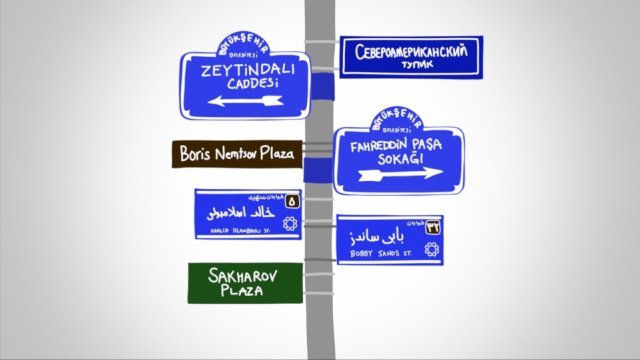 Turns out renaming street signs is a pretty easy, and common, way to score political points against international rivals.

Driving through D.C., you'll notice that there are these little bonus signs in front of Russian Embassy buildings...

Turns out, these are part of a larger game of "street sign diplomacy" between the U.S. and Russia, as well as a host of other countries around the world.

In 2018, the part of Wisconsin Avenue that the Russian Embassy sits on was renamed "Boris Nemtsov Plaza."

Nemtsov was an opposition politician in Russia and a longtime critic of President Vladimir Putin. He was assassinated in Moscow in 2015.

In response, Russian politicians moved to rename a street of their own. Moscow is currently considering whether it'll rename the U.S. Embassy's street "North American Dead End."

This all may seem a little petty — and really, it kinda is — but street name diplomacy is pretty popular, and it's been around for a while now.

Take the Russian ambassador's residence, for example. It sits on Sakharov Plaza — a name it gained in 1984 after Congress pushed to honor Andrei Sakharov, a Russian dissident and Nobel laureate imprisoned in the U.S.S.R.

Two more recent proposals that haven't gone through yet would rename streets in front of the Cuban and Chinese embassies in D.C. to honor prominent dissidents from both countries.

The U.S. and Russia aren't the only players in this, either. Countries like India, Iran, and Turkey all dabble in cartographical trolling of their rivals.

So why is this so popular? Probably because it's relatively easy to do and looks good. Which means it's good politics — even if it's totally superficial.