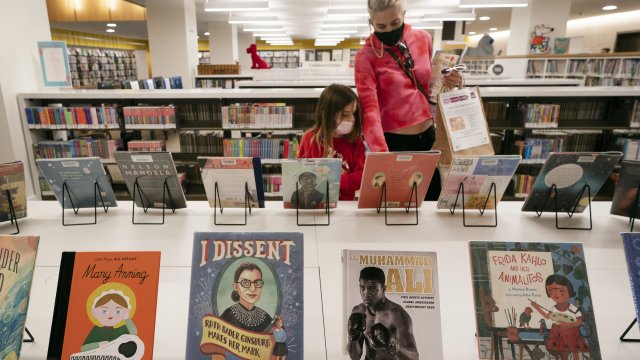 Many librarians are dealing with a wave of challenges to what they're putting on their shelves.

Republican legislators and candidates across the country proposed banning the academic framework, but the dialogue around the topic poured fuel on the fire of other pushes to regulate what's taught in the classroom.

Many of the same forces behind the movement to ban critical race theory trickle into the age-old practice of banning books.

America’s debate over book bans dates back to the 1600s, when Puritans would engage in book burnings. Throughout American history, books have been challenged for featuring adult themes, profanity or how they depict racial issues.

Those challenges have come from across the political and ideological spectrum, but the recent push to ban books has come from the right.

Even at the height of the attention on CRT last fall, book banning showed up as a focus. For example, an ad run by Virginia’s incoming governor Glenn Youngkin last fall featured "As a parent, it’s tough to catch everything, so when my son showed me his reading assignment, my heart sunk," Murphy said. "It was some of the most explicit material you can imagine."

She was talking about the book "Beloved" by Nobel Prize winner Toni Morrison, as in the Pulitzer Prize-winning book that became the film starring Oprah Winfrey.

The book features scenes with violence and sexual themes that have been challenged before, but they fit into a story about a family of formerly enslaved people set after the Civil War. That story is often regarded as one of the most iconic works of modern American fiction.

But the parent from the Youngkin ad wanted that book banned.

Deborah Caldwell-Stone, the director of the Office of Intellectual Freedom at the American Library Association, knows a thing or two about book challenges.

"I probably wouldn't quarrel with that," Caldwell-Stone said. "That's a fine choice for her to make for her son, but that choice shouldn't be imposed on the other students, on the other families who want and desire to read this book, to learn from it, to prepare for college, prepare their writing skills, from learning from this literature."

Caldwell-Stone points out it’s not just a parent here or there trying to ban kids from reading certain books. It's school board members and state legislators across the country pushing for some works — or even ideas — to be banned from the classroom.

"We're seeing a fairly well-coordinated campaign among a number of partisan organizations who oppose LGBTQ rights, who believe that critical race theory represents some kind of existential threat to our democracy to limit access to those ideas in our schools and libraries," Caldwell-Stone said.

In Oklahoma, a state representative has pre-filed a bill that could be considered in a session next month that would ban the 1619 Project from being taught. The 1619 Project is an analysis of U.S. history by Nikole Hannah-Jones and The New York Times that focuses on Black Americans.

The author of the bill told Newsy's sister station in Tulsa that the proposed legislation was preemptive, and that he hadn’t heard any complaints or any evidence it was even being taught in schools.

One Texas legislator took it a step further, proposing a ban of 850 books from schools, including books on sex education, student legal rights, books with LGBTQ themes, a graphic novel version of the classic short story "The Lottery" by Shirley Jackson, a nonfiction book about quinceañeras, a history book about women in the Holocaust and even a book called Pugdog about a kid realizing it's okay for his female pug not to be girly.

"That immediately sent our school librarians and educators into a frenzy of a lot of work that added on top of their already very busy plates to go through and review those books," said Shirley Robinson, the executive director of the Texas Library Association.

Robinson says many librarians in the state have told her they’ve rarely seen book challenges come up and now are dealing with a wave of them — another hurdle for people who are just trying to do their jobs.

"Our school librarians are certified educators," Robinson said. "They're highly trained, they have a master's degree in library and information services and they're highly-respected components of the educational system as well. So it's been a big affront not only to intellectual freedom, but also to their professionalism and the work that they're trying to do in schools."

All of these efforts are Republican-led, and they come as many party leaders have alleged conservative speech is being suppressed and decried so-called “cancel culture.”

It also happens to be the case that some of the most contentious books are ones that feature LGBTQ themes. Until 2020, for four straight years, the majority of books on the American Library Association’s list of most banned books featured LGBTQ stories.

The 2020 list featured more books challenged based on their stances on race and racism, but even then, the book that was most targeted for bans was “Melissa,” a book about a transgender girl that had previously been published under the title “George.”  These debates also happen at a local level.

In the St. Louis area, more than 20 books have been formally challenged across four different school districts. Some parents are asking the districts to remove the books from school libraries, alleging they contain offensive language or pornography, but it happens to be the case that some of the most contentious books come from authors with perspectives that historically haven't been well represented in school libraries.

An analysis by St. Louis Public Radio found that two-thirds of the books being challenged were written by authors of color or authors who identify as LGBTQ.

Supporters of the book bans deny that it has to do with the authors’ identity, but it’s still an example of a contentious debate playing out across the country over First Amendment rights.