How Debt Is Impacting Voting Rights For Some Americans 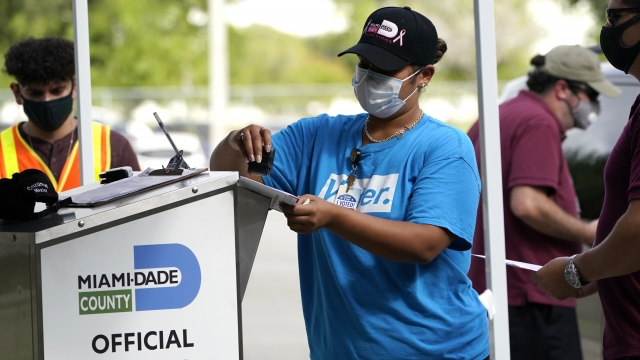 In Florida, people who owe fines connected to their felonies cannot vote until they are paid up.

The right to vote is a sacred part of the American fabric. But that right can be lost with a felony conviction, which Angel Sanchez learned firsthand.

Newsy met him in Miami, where he says he was arrested as a teen. After 12 years in prison and some time away to complete an undergraduate degree, he returned to Miami to graduate from law school.

In Florida, people who owe fines connected to their felonies cannot vote until they are paid up.

But Sanchez worked to pay it off, go to college and advocate for voting rights restoration.

Advocates reached a milestone when voters in Florida passed Amendment 4 in 2018, which restored the right to vote for people with felony convictions once their sentence was completed.

The Republican-led legislature then passed a law to define a completed sentence to include payment of fines, fees and restitution. An appellate court upheld it.

The Florida Rights Restoration Coalition, which helped push for Amendment 4, is now focused on how it can help these people trapped in debt.

Deputy Director Neil Volz estimates there are hundreds of thousands of returning citizens who still have financial obligations preventing them from voting.

"We're putting people in a position where they have to choose between paying for health care or paying for rent, and accessing democracy and having their voice heard," Volz said. "We have over 20,000 people who have signed up who are in our systems and we are working every single pathway possible. Whether that's to help them realize that they actually are eligible to vote, whether that's to work through the court system to see if we can get their sentences modified, whether that is to get their fines and fees paid to work through the clemency process."

According to the Voting Rights Lab, Florida is among six states requiring felony-related financial obligations to be met before regaining access to the ballot box.

Blair Bowie is legal counsel with the Campaign Legal Center, which was involved in the legal challenge to Florida's rule. It also has cases active in Tennessee and Alabama.

"In our opinion, we think the federal courts have made a mistake here. They haven't recognized these laws for what they are, which is a poll tax," Bowie said. "So we have been challenging that law in court in Alabama as well. And the Florida ruling certainly makes that more difficult. … In Alabama, more than 100,000 people are barred from restoring their voting rights just because of legal financial obligations. And more than 15%  of those people owe upwards of $10,000. That's an insurmountable barrier."

Critics argue that such laws disproportionately affect poor people and people of color. But back in Florida, the governor's office maintains it's inaccurate to imply court-ordered fines are similar to a poll tax and says the state measure wasn't implemented with any intent to discriminate.

"We have a lot of evidence that supports where the state went with SB7066, but at the end of the day people voted on the words that felons must complete all terms of their sentence," he said. "The question was not if you're rich or if you're poor — it was, you must complete all terms of your sentence. And that's why it was important for us to go back and put another provision in and say look, court, you can actually reduce these if people have the inability to pay."

From prison to the polls, there's now a pathway for more to vote.

Aubrey Jewett is an expert on Florida politics.

"If you have a large group of people registering to vote that aren't currently registered and they tend to lean toward one party or the other, that might actually impact the balance of power and help decide who wins," he said. "There is the potential in the future that we could still ultimately see a lot more people registered and that it might have an impact."

Sanchez voted, but he describes the system as hard to navigate.

He says while fact-checking the exact amount he paid, he learned the system still said he owed money. He worked through individuals and state agencies to confirm his eligibility and clear the amount

These days, Sanchez helps others through the Florida Rights Restoration Coalition and is "trying to make less harsh the faults in the system that, unfortunately, lands on the shoulders of those who have the least resources to bear it."