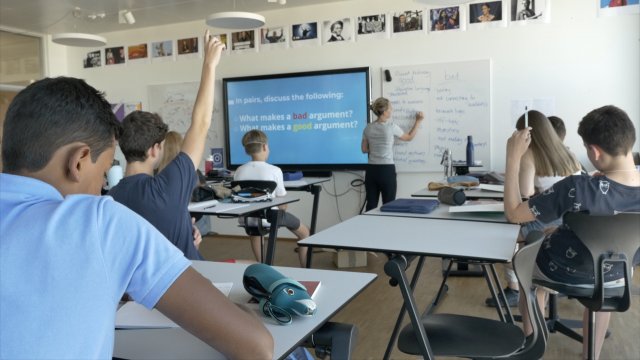 Newsy visits a Copenhagen school to find out how it's keeping the virus at bay.

Summer break is over in Denmark — and kids are back to school for the second time this year.

The Scandinavian country was the first in Europe to reopen schools last spring. It managed to do it so successfully that the government is now easing up some social distancing guidelines.

How did Denmark achieve such a feat and what can other nations learn from it?

To find out, Newsy talked to staff and parents at one school with nearly 1,000 students from Pre K to 12th grade: the Copenhagen International School. The school says it hasn't had a single case of the virus since it reopened in April.

"We tried to make sure that the logistics of the school day meant that the number of interactions, the number of physical touch points for staff and students, was reduced," said Sandy Mackenzie, the school's director.

Following government guidelines, the school first opened doors to younger kids and then gradually allowed older students back in.

Leaders at Copenhagen International say one of the most challenging aspects of the new rules was the need for more space and more staff.

"I think we did not anticipate the manpower and the physical energy it really took to make that happen," said Moira Christensen, the school's deputy director.

Mackenzie, who's been sending daily reports to parents, says transparency and collaboration has been key to the school's success.

"It's about comfort level and confidence as much as the restrictions and precautions themselves," he said.

"I, as any other parent would be, was concerned," said Poornima Luthra who was children at the school. "But at the same time, I think information is key. Here in Denmark, of course, there's a lot of information that was being shared by the government, by health authorities."

The school doesn't require masks for staff and students and doesn't check students' temperatures. But it has strict guidelines for when parents should keep kids at home and get them tested.

"Everybody can get a test. You don't need to go through a doctor. You can book it online. And within about 24 hours at the moment, you will be able to get tested," said Charlotte Zeeberg, a nurse at Copenhagen International School.

Danish educators and parents are fully aware of the risks that come with sending kids to school. But for now, they have managed to do it safely to the huge benefit of the students.

"It's the social connections that my children are thoroughly enjoying right now. Being back with their friends, reconnecting, playing at the playground, you know, and just just being around their peers, as well as those adult interactions in the school environment," said Luthra.