The Saturday Night Massacre: No Deaths, But Plenty Deadly For Nixon 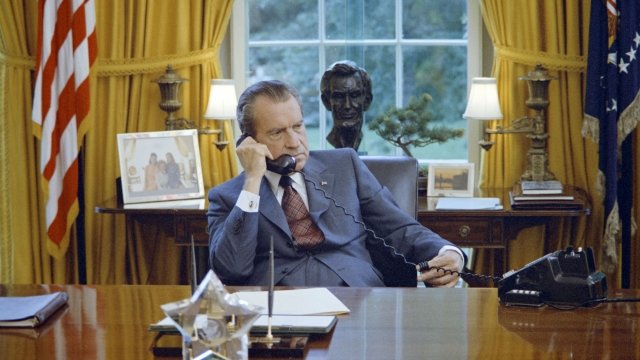 Once Richard Nixon ordered the firing of Archibald Cox, the president's fate was nearly sealed.

The Saturday Night Massacre was bloodless, but you could argue it ultimately proved fatal for President Richard Milhous Nixon.

The "massacre" took place on Oct. 20, 1973. The play-by-play is pretty well-known: three men down and one president with hands dripping in bureaucratic blood.

But much more was happening behind the scenes in Washington's inner sanctums from the start. This history comes primarily from accounts in The Washington Post, Politico Magazine and the "Slow Burn" podcast.

On May 18, Archibald Cox was hired as special prosecutor to investigate what was then called "The Watergate Affair." He was respected around town, having served as solicitor general under JFK and LBJ.

Impeachment Is No Simple Process â Just Look At 1974

We know the infamous break-in at the Watergate Hotel, but it took a long, complicated process to go from that night to impeachment.

Cox and Nixon locked horns on July 23 when the prosecutor subpoenaed recordings Nixon had made in the Oval Office. The president refused to cooperate and invoked executive privilege. Oct. 12: A federal appeals court ruled against Nixon and said he had to comply.

Three days later, Nixon tried to broker a deal — he would not turn over all of the tapes to Cox. Instead, he'd submit a full accounting of their contents to a judge. Cox rejected that offer. On Friday, Oct. 19, 1973, Nixon published a statement in The New York Times criticizing him for not accepting "a reasonable proposal."

The following afternoon, Oct. 20, Deputy Attorney General William Ruckelshaus and three aides were waiting in Attorney General Elliot Richardson's office because the AG himself had been summoned to the White House. He returned and said Nixon had ordered him to fire Cox. He had refused and was planning to resign.

Within a few minutes, the White House was on the phone with Ruckelshaus. The chief of staff gave the deputy AG the same marching orders: take out Cox. But Ruckelshaus recalled later: "He was just insistent that [it] was my responsibility to carry this out....And I said, 'Not if I think he's fundamentally wrong, which I do. Then my obligation is higher than just him.'"

At that moment, the second man was down. Robert Bork, the solicitor general, stood next in line, and he ended up dismissing Cox.

Immediately, this "massacre" turned Watergate from scandal to crisis. Criticism poured in from both sides, and there were louder calls for impeachment. Nixon was mortally wounded in the massacre. He eventually agreed to the appointment of another special prosecutor and to release the evidence Cox had subpoenaed.

To no avail. After the Saturday Night Massacre, legendary UPI reporter Helen Thomas recalled: Nixon was "a dead man walking."