How Does The U.K. Supreme Court Work? 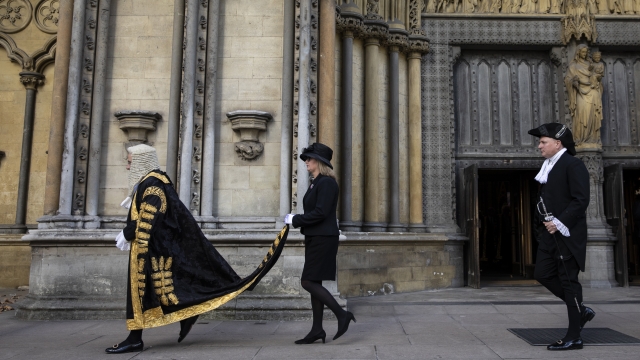 In the wake of a ruling that Boris Johnson broke the law by suspending Parliament, the British PM is calling for "some form of accountability" in his country's highest court.

The U.K. Supreme Court unanimously ruled that Johnson's proroguing of Parliament for five weeks "had the effect of frustrating or preventing the ability of parliament to carry out its constitutional functions without reasonable justification." Not long after that, Johnson told The Telegraph that while he respected the court's judgment, he took issue with its decision to intervene on "an acutely sensitive political question, at a time of great national controversy." He also raised concerns about what kind of precedent that sets.

And when it comes to precedent, this could be huge, given that the British Supreme Court is still practically brand new. In fact, it just turned 10 this week. With all this in mind, let's take a look at how the British high court works — who's on it, what they do, and how.

The U.K.'s Supreme Court was established in 2009 to assume the judicial authority that was once held by the House of Lords. Like the U.S. Supreme Court, it's the highest appellate court in the country and only hears cases "of the greatest public and constitutional importance." The U.K. court has 12 justices, but only an odd number of them get to hear each case. That ensures a clear majority ruling even if justices disagree on the outcome. Unlike in the U.S., the U.K. Supreme Court cannot strike down laws — it can only rule on how laws should be interpreted and applied. If the panel believes a law is at odds with legal human rights mandates, it can tell Parliament to reconsider that legislation.

The British appointment system is a bit more complicated than the American one. The process begins when there's a vacancy on the bench, which happens more frequently in the U.K. than in the U.S. because justices have to retire when they reach either 70 or 75 years old. A committee with representatives from England, Wales, Scotland and Northern Ireland meets to discuss viable candidates. That committee's usually chaired by the Supreme Court president.

For someone to be eligible, they must either have been a High Court or Court of Appeal judge for two years or a practicing lawyer for 15 years. After consulting with senior judges and other high-ranking officials, the committee selects one candidate. Their name is sent to the Lord Chancellor, who can either approve the nomination, reject it or ask the committee to reconsider. The chancellor can only reject one nominee during the process, so if they reject the committee's first choice, they can't reject the second.

Once the chancellor approves a nominee, their name is sent to the prime minister, who forwards it to the queen for a formal appointment. Once someone becomes a U.K. Supreme Court justice, they cannot actively belong to any political party.

It's unclear what Johnson's proposed "accountability" for judges would entail. But he said the Supreme Court's ruling "will take a while to be worked through" and that "the consequences of that judgment have yet been fully evaluated."