How Dogs Could Protect Babies From Asthma, Allergies 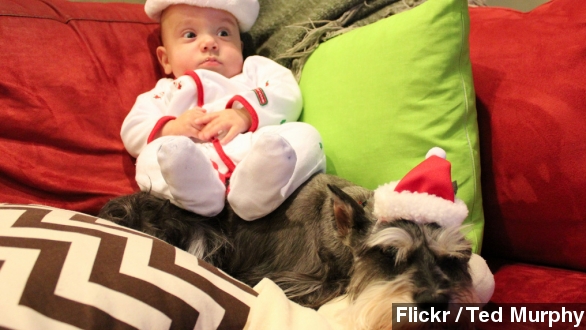 New research shows exposing infants to the family dog could help prevent the development of asthma and some allergies.

It's long been known dogs are man's... and woman's best friends, but what about babies? A new study shows keeping pups around you're little ones can actually be good for their future health.

"A new study lead by a researcher at UC San Francisco says having dogs in the house may inoculate the GI tract of babies and lead to a more mature immune system. That could cut down on childhood allergies and asthma." (Via KUTV)

"This theory is the first of its kind and it goes against traditional thinking that dogs and pet hair are a trigger for asthma." (Via KWGN)

The research was actually done on mice — scientists exposed them to dust from homes where dogs live. But researchers say the results are also very likely to be applied to human infants.

One researcher said, "​The results of our study indicate that this is likely to be one mechanism through which the environment influences immune responses in early life... It is something we are currently examining using human samples in a large multi-institutional collaborative study." (Via HealthDay)

And although the research is still a bit of a work in progress, WCBD notes,

"They encourage parents not to shy away from allowing the family pet to lick the child. That's not to say that basic hygiene shouldn't be followed."

Seems this one's got the right idea (NAT) All rolled into one — a dose of scientific knowledge and some extra special cuteness. Aww! (Via YouTube / MsJadensDad)

But researchers do note the findings shouldn't prompt new parents to run out and go get a dog. The results merely found an associating, not necessarily a cause and effect relationship.