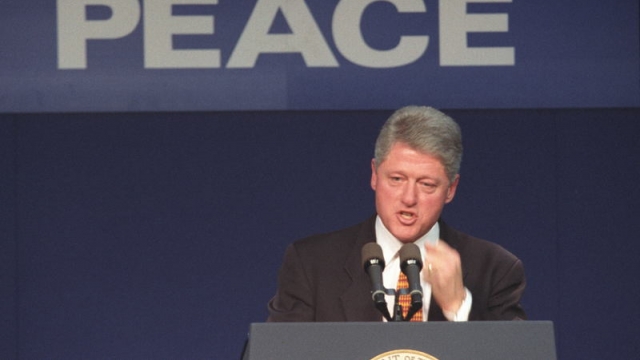 If the House votes to impeach President Trump, his case will move to a Senate trial. And senators may look to Bill Clinton's trial as a guideline.

If the House of Representatives approves articles of Impeachment against President Donald Trump, senators will be tasked with conducting a trial for just the second time in modern history. And they may look to President Bill Clinton's case as a guide to navigate largely uncharted territory.

"It was the first trial of an impeachment of a president since the 1860s, so there really was no precedent," said David Hawkings, editor-in-chief of The Fulcrum. "The Senate sort of had to sit down and decide for itself, 'Well, how are we going to conduct this trial?'"

The Constitution lays out a few ground rules for an impeachment trial: The Chief Justice of the Supreme Court presides over the trial while the senators act as jurors. It takes a two-thirds supermajority to convict the president.

But the rest of the process is left up to the Senate to decide. In 1999, the Senate voted 100-0 on rules to conduct President Clinton's trial.

"They knew the end of the movie, they just didn't know how they were going to get there. They knew there would be nothing close to a two-thirds majority to convict Bill Clinton," Hawkings said. "But, they also knew that they didn't want to make a joke of it, that they wanted to take is seriously that they wanted to look like they were doing their duty. The 100-nothing deal was to make it look that way.

A Look Back At The Impeachment Of President Bill Clinton

Only once in modern U.S. history has the House of Representatives voted to impeach a president.

It began every day at 1:00 p.m., leaving time in the morning for other legislative business and TV cameras were turned off after 6:00 p.m.

Senators submitted handwritten questions to the Chief Justice, who read them to the prosecutors and defense teams.

Thirteen House Republicans served as prosecutors, and Clinton had a team of counselors to defend him. Each side had three days to present their case. Witnesses did not answer questions publicly, rather, Senators were able to watch video experts of closed-door depositions.

Today's Senate leaders on both sides of the aisle would have to come up with rules that a majority can agree on in order to make the process fair.

"If Mitch McConnell and the Republicans want the trial to come across for the country as legitimate and serious, He - McConnell - will probably want to get buy-in from Chuck Schumer, the Democrat leader, and the other Democrats to come up with a trial procedure that everybody can live with," Hawkings said.

It's unclear whether senators will hear live witness testimony in President Trump's impeachment trial. Many witnesses have already testified in front of TV cameras in the House, but a few key officials who have, so far, resisted congressional subpoenas, could be compelled to answer questions in the Senate.

One thing President Trump's trial may have in common with President Clinton's -- his defense.

Clinton's team argued that the evidence against him was largely circumstantial, that the investigation was tainted by political bias, and that the allegations did not meet the standard to remove him from office.

"The ultimate line is, is this misbehavior so egregious, so bad, that it means essentially undoing the results of an election? That was the ultimate defense of Clinton you'll certainly see that from Republicans when it comes to Trump," Hawkings said.