'Shut It Down': Using Economic Disruption To Force Reform 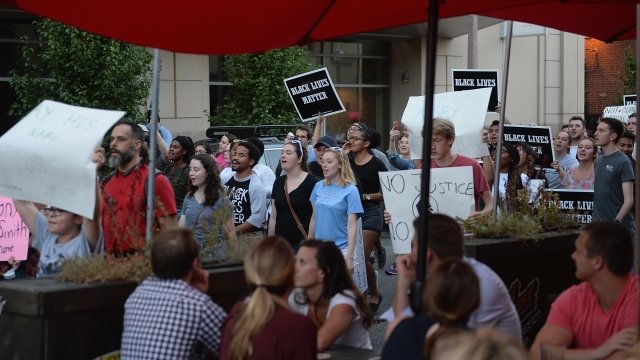 Demonstrators in St. Louis are turning to economic protests to prompt police reform after the acquittal of a police officer who killed a black man.

After a judge acquitted a former St. Louis police officer of first-degree murder for a 2011 shooting, protesters marched to St. Louis City Hall and pledged to disrupt the city's economy.

"We got to use our economic power to sanction the constant wrong that's being perpetrated upon our people," activist Zaki Baruti said.

Because of those demonstrations, businesses in St. Louis closed early, concerts were canceled and a low-humming commercial district became a protest site.

According to data on officer-involved shootings, police officers are more likely to be acquitted than found guilty after fatal on-duty shootings.

"Economic disruption has been a tool for social movement protesters since the late 19th century into the early 20th century," Northwestern University political science professor Alvin Tillery said. "It's a great way to spread the message that, 'Hey, something really unsavory is happening here with policing.'"

Tillery explained the economic disruptions seen in St. Louis over policing are reminiscent of those carried out during the civil rights movement.

"The famous Montgomery bus boycott in 1955 was a way that Ms. Rosa Parks and Dr. King and the other leaders in that city were able to win concessions about desegregating buses by simply boycotting the bus lines," Tillery said.

Blacks in Montgomery had significant power during the bus boycotts — they made up around 75 percent of the bus system's ridership. When they chose not to ride, Montgomery felt it.

That's a pretty clear example of how economic disruption can work; a year after the Montgomery bus boycott began, a Supreme Court ruling paved the way for the desegregation of buses in Alabama.

More recently, protesters in Chicago reportedly caused some stores along Michigan Avenue to lose out on 50 percent of sales during Black Friday demonstrations in 2015. This was in response to the dashcam video of then-Chicago police Officer Jason Van Dyke shooting and killing 17-year-old Laquan McDonald.

Craig Futterman helped force the release of the video of Laquan McDonald's death. Now, he's taking the city back to court to push for police reform.

In St. Louis, there are already signs of how protests could further disrupt the city's economy. Ongoing demonstrations could affect St. Louis' bid to become Amazon's second headquarters — a loss that would deny the city 50,000 more jobs.

But what's difficult about economic disruption, according to Tillery, is turning strategy into tangible results.

"To actually have police reform, you need to marry the economic protest with political reform," Tillery said. "And those are political reforms that would make local politicians battle with police unions and actually hold the police accountable for these indiscriminate killings. That's very difficult to do."

Persistence is something that has made economic disruptions successful in the past. Sustained boycotts in Montgomery, Alabama, and Greensboro, North Carolina, led to the desegregation of buses and lunch counters, respectively.

While the fight for change in St. Louis is different from fights to desegregate in the South, leaders there say they have no intention of letting up.

"We are going to push a very powerful and prayerfully successful call for our people, not just here in St. Louis, but throughout the state of Missouri not to be spending money during the holiday season," Baruti said. "Hit 'em in the pocket."