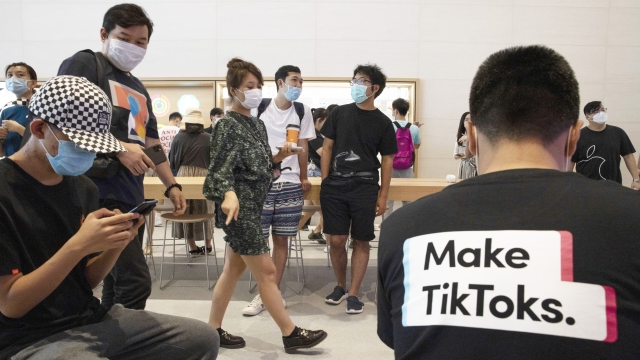 What is the most visited site on the internet? It's TikTok.

With more than 1 billion monthly users, the platform isn't just viral lip-sync videos. TikTok is also a source of information — and misinformation.

Along with life hacks and magic tricks, the app was also showing Abbie Richards — one of those 1 billion monthly users — videos with false information.

Misinformation on TikTok includes threats of school violence shared on the site that thankfully turned out to be bogus.

TikTok has pulled down videos and banned hashtags referencing debunked claims about the 2020 election and COVID-19, playing whack-a-mole against dangerous deception.

"Once something is created it can be flagged and taken down, and within that instant something new will be posted," professor at William Paterson University Corey Basch tells Newsy.

"They're so immersed in it," Basch explains, "that's what's concerning. They're accessing things that might be difficult to determine whether it's true, whether it's reality."

She points to a video with a baseless message.

"This is real," the video begins, showing a model struggling to walk captioned "get vaccinated, they said." The woman eventually collapses.

TikTok allowed the video to stay but added a banner linking to vetted COVID information.

"You can assume there's some subset of the population that doesn't realize that it's a joke," Basch says, claiming that just adding a banner is not enough.

"That's how people end up going down the rabbit hole, so to speak," Basch says.

A TikTok spokesperson tells Newsy the company "strive[s] to promote an authentic TikTok experience by limiting the spread of misleading content, working with fact checkers, and providing access to authoritative information."

But there are ways around the censors, by using codewords, emojis and using the audio from a banned video.

Thousands of videos viewed again and again feature the same audio from a removed post about COVID-19 vaccines while showing something totally unrelated, like a cute dog.

"TikTok's creators do know and have shown signs that they are adept at circumnavigating and getting around TikTok's efforts," Ciarán O'Connor, a disinformation analyst with the Institute for Strategic Dialogue, tells Newsy.

We found many of those posts with audio from the banned anti-vaccine video don't have TikTok's banner linking to well-sourced information.

However, the company is trying to educate its fans. "TikTok Tips" teach how to avoid falling for inaccurate material. "Being media literate is a key part of having a great TikTok experience," one of its videos says.

Rather than share something with unfounded claims, you can report it.

"Flag posts and become part of the solution," Basch advises.

Richards now devotes some of her own TikToks to fighting misinformation ...

"My videos take a lot of research," Richards says.

.. while pushing the site to weed out more of the bad stuff.

"It's just a very difficult task, but they should be doing it," Richards says of TikTok.

A big challenge for a big platform and its billion users.