How FIFA Tried To Spin Its Darkest Day 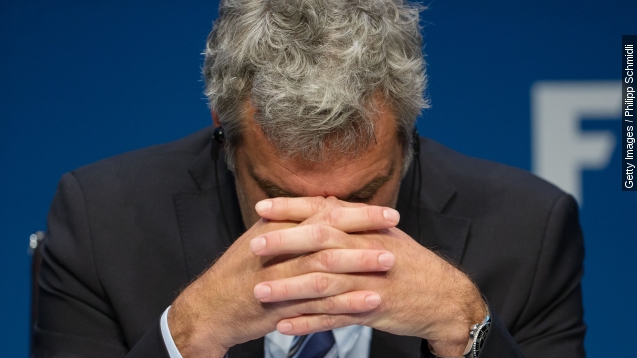 After decades of allegations, FIFA has finally been hit with criminal charges, and now it's trying to figure out how to save face.

FIFA is in a really uncomfortable position. (Video via FIFA)

The organization is notoriously untransparent, a fact perfectly illustrated by the way some of the arrested officials were physically shielded from the press by a sheet. (Video via RT)

So, while these allegations have been raised for decades, FIFA has always remained aloof, either denying them or dismissing them through the quiet resignations of impugned officials. (Video via Channel 4)

Now, these two investigations have put all of FIFA's dirty laundry — and there's a lot of it — in the light of day, and it has to find a way to save face. (Video via ABC)

"This for FIFA is good," FIFA's director of communications said Wednesday in a press conference.

And that's where the spin comes in.

"It was FIFA that 18 of November who asked the general attorney to open the case," communications director Walter De Gregorio said at a press conference.

But later in the day, acting U.S. Attorney Kelly Currie seemed to contradict that, saying, "Through a variety of sources and means, going back a number of years, our investigation gathered momentum and resulted in the charges today." (Video via NBC)

That means Wednesday's arrests could very well have had nothing to do with FIFA's internal investigation. (Video via ODN)

Through all of this, FIFA has insisted the investigation won't affect president Sepp Blatter, who's escaped charges, despite presiding over the organization for 17 of the 24 years the Department of Justice investigation covered. (Video via Al Jazeera)

And that could prove true. FIFA's shown in the past, if it's committed to something, no amount of controversy can change its course.

But if nothing else, this investigation has done more to expose FIFA's inner workings, especially the corrupt bits, than other incidents of controversy, and, as the investigators repeatedly reminded the press Wednesday, this is far from over. (Video via BBC)

This video includes images from Getty Images and the Dutch National Archives.