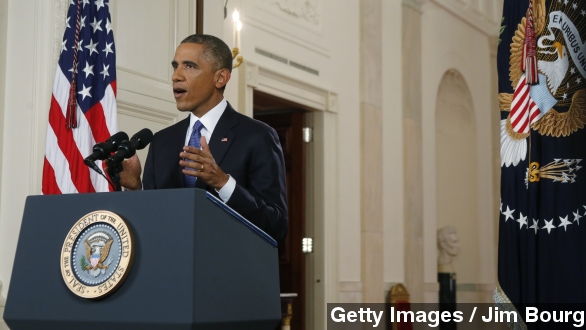 President Obama's immigration reform could grant as many as 5 million with legal working status, which might ripple across the U.S. labor market.

Jobless claims are down, more Americans are confident enough to quit their jobs and wages are slowly ticking up.

And right when it looked like the balance of the labor market was slowly tipping back toward a positive outlook for workers — a big announcement. (Video via CCTV)

"There are actions I have the legal authority to take as president," President Obama said.

So how can we know how Thursday night's immigration reform will affect the U.S. labor market?

One option is to look at President Reagan's 1986 immigration reform, which granted amnesty to 1.7 million unauthorized workers. (Video via CBS)

That's what The Wall Street Journal did, citing a study that found once many immigrants were naturalized in 1990, "just 4% of farm workers were in the same industry, while roughly a quarter of those workers had shifted over to construction and other laborer jobs with better pay."

And most agree President Obama's action will also raise wages for undocumented immigrants soon able to work legally and find work to match their skills. Left-leaning Center for American Progress estimates an average rise of 8.5 percent.

But the rise in wages for undocumented workers would have little impact on the aggregate wages of the economy as a whole.

As Forbes pointed out, wages for amnestied workers under the 1986 amnesty rose only 6 percent. At that rate, even Nevada — the state with the largest percentage of undocumented workers in its current work force — would see only a 0.6 percent increase in its aggregate wages.

The White House itself estimated in a report the average wages for U.S.-born workers would rise by just 0.3 percent in 2024 — or about $170.

But even without wages, Fortune noted noted more immigrants could help boost the number of jobs in the country, citing a study that showed highly skilled immigrants are twice as likely to start a business as native-born Americans.

No matter the impact the president's immigration reform has on the economy, though, it might be short-lived. Barring further permanent action, these reforms could end — along with Obama's executive authority — in two years.