How Is Italy Managing The Reopening Of Bars And Restaurants? 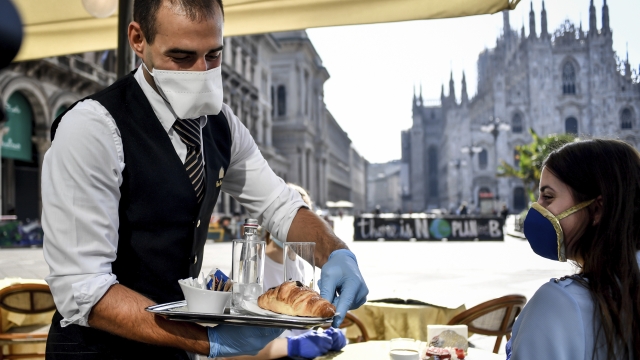 Italy imposed Europe's first lockdown after being hit hard by the virus. But after a two-month decline in new cases, it's serving cappuccinos again.

"I missed coffee in a glass!"

Italy is slowly resuming la dolce vita. The country implemented Europe's first lockdown after being severely hit by the virus. But after a two-month decline in new cases, it's serving cappuccinos again — with a new look.

"It's strange because there is a plexiglass at the counter," said a customer at Bar Palomba in Rome.

"There are some hand sanitizers around the restaurant so people can sanitize their hands," said Massimo, the co-owner of Ristorante Dal Toscano, also in Rome.

In addition to social distancing requirements, the government is also asking reopening restaurants to prioritize reservations, phone menus and outdoor dining. Rome and other major cities are allowing establishments to extend their outdoor spaces for free. They are also closing some streets to provide free space for restaurant tables.

"Not having to pay to occupy public land is a good thing, but the government needs to offer more help. We hope that they will manage to do that in time," said Riccardo Palomba, the owner of Bar Palomba.

Amid criticism that small businesses are not getting enough financial help, Prime Minister Giuseppe Conte agreed to open bars and restaurants weeks earlier than initially planned.

"We are confronting this risk, and we need to accept it, otherwise we would never be able to relaunch the economy," he said.

Still, many businesses that rely on tourists remain closed. And those that have reopened may find it hard to survive with fewer customers.

"This year there will be no tourists in Rome and especially in the area where we work, this is a big problem," Massimo said.

Although Italians are eager to get back to normal life, they are also confused by the many new rules. The government published a 120-page document on reopening practices the day before it lifted restrictions.

"We had information from the newspapers, but the real rules to open we received just the last day before open," Massimo said.

One rule states that Italians must wear masks and disposable gloves at supermarkets and clothing stores. That led to a shortage of gloves and chaotic scenes.

"And so there was this panic scene in the queue, 'Oh my god, we don't have gloves.' People are going to other queuers to buy gloves," said Cecilia Ferrara, a freelance journalist in Rome.

Adding to the confusion is the fact the government's own scientific council recently warned that lifting restrictions too early could bring a new wave of cases. Still, Italians are hopeful the worst is behind them.

"Reopening after all this time under lockdown feels like the first day of school. So with a lot of enthusiasm, we are hoping to restart in the best way," said Palomba.