How Has Israel Launched The World's Fastest COVID-19 Vaccine Rollout? 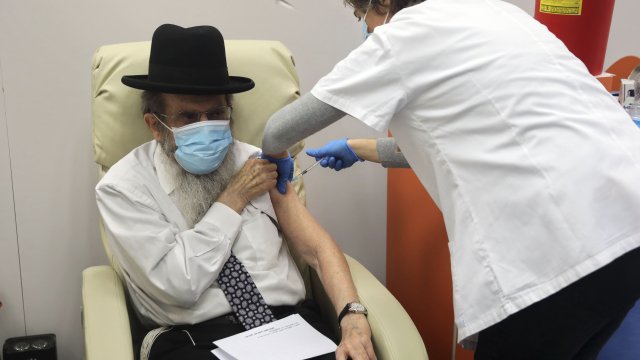 Israel says it has already administered nearly 650,000 doses of the Pfizer vaccine, inoculating 7 percent of its population in only 10 days.

As frustration grows in the U.S. over the speed of vaccine rollouts, another nation appears to be off to an extremely rapid start.

Israel says it has administered nearly 650,000 doses in 10 days — significantly leading the world in vaccinations per capita.

How is the country achieving such a feat?

First, Israel benefits from being a small nation of 9 million.

But its successful vaccine rollout is also the result of its centralized and digitized public health system, which treats everyone for free.

Every Israeli citizen is insured and has a designated doctor at a local clinic.

"Everyone can basically go online and schedule an appointment for a vaccine. And if they don't do that, their M.D. will call them and say, 'You're 81 years old, why haven't you come and taken your vaccine?'" Eyal explained.

"I got here a bracelet that said I was vaccinated," said Elisheva Riftin, a 77-year-old Israeli citizen who just received the first dose of the Pfizer vaccine.

"They gave me two appointments for the first shot and for the second shot," Riftin said, adding that booking her vaccinations with her local clinic was just as smooth as booking any other doctor consultation.

"They gave me the address of the compound, the vaccination compound, and I went there, no problem."

Prime Minister Benjamin Netanyahu wants to inoculate a quarter of the country's population by the end of January — a goal the country seems on track to achieve.

But it's unclear whether the government will be able to procure enough vaccine doses down the road to keep up with the current daily vaccination rate of 150,000,