How Laremy Tunsil's NFL Draft Stock Went Up In Smoke 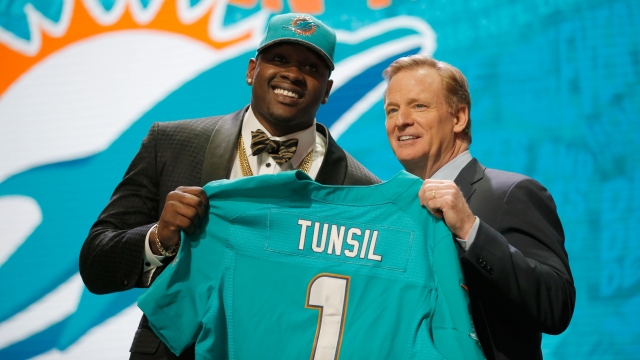 The projected top-five pick fell to the Miami Dolphins at pick 13 after his social media accounts posted damning footage minutes before the draft.

Former University of Mississippi tackle Laremy Tunsil was preparing to celebrate becoming a top pick in the 2016 NFL draft when his stock suddenly plummeted.

The projected top-five pick fell to the Miami Dolphins at pick 13 after his Twitter and Instagram accounts posted damning footage minutes before the draft.

A video showing Tunsil smoking an unknown substance from a gas-mask bong was posted to his verified Twitter account before being deleted.

Tunsil's representatives say the accounts were hacked. The Dolphins say they already knew about the video and that it's two years old.

Still, the video clearly caused some teams to shy away from the top talent.

As Tunsil remained on the draft board, things got worse. Screen shots of a text conversation between Tunsil and someone who seems to be an Ole Miss coach were posted on his Instagram account.

Tunsil admitted to accepting payments at a press conference after being picked. He appeared to find out about the Instagram leak on live television.

Tunsil doesn't have to answer to the NCAA for the apparent rule violation, but the Instagram posts could hurt his former school.

The posts were captioned: "Coach freeze and the whole ole miss programs are snakes. They cheat!"