Mexico Is Cracking Down On U.S.-Bound Migrants — At What Cost? 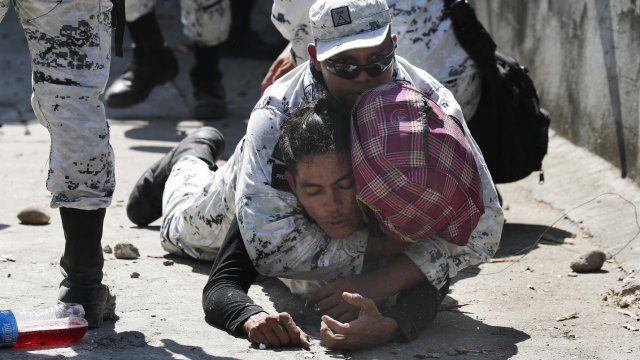 Under U.S. pressure, Mexico has ramped up efforts to stop transiting migrants from reaching the U.S. How is the crackdown playing out on the ground?

The multiple clashes between a caravan of migrants and Mexican troops this week illustrates how serious Mexico is about blocking U.S.-bound migration. And the country's efforts are paying off: The Trump administration, which threatened Mexico with tariffs last June, now commends Mexico for "maintaining the integrity of their border." But how exactly is Mexico's crackdown playing out — and at what cost?

"They've really militarized the border. The National Guard are basically a military force that are doing what should be civil police work right now. Many, if not all of them, don't have any kind of training in human rights."

Mexico arrested nearly twice as many migrants in 2019 than in 2017 and increased deportations by 40% during the same period. That's according to a Newsy analysis of Mexican government data.

The country has deployed thousands of troops to the border and at various immigration checkpoints. It also stopped giving migrants transit visas and started giving them a choice instead: Agree to be deported or apply for asylum in Mexico. But advocates for migrants say the country's asylum agency is so severely underfunded that it's inevitably violating its own generous asylum laws.

The number of Mexican asylum applicants nearly doubled between 2018 and 2019. Meanwhile, government funding for the asylum agency has actually decreased.

"The official stance is they're just trying to abide by their own laws and the international treaties which they're party to. But if you look at what's going on on the ground, there are certainly many instances, even if it's not official policy — although maybe it is — of violations of Mexican law and international law. And the end result is a lot of people being returned to countries where they are going to face persecution."

Migrants who decide to take a shot at Mexican protections are stuck in the country's poor southern area until the resolution of their cases months later. Advocates say the migrants in limbo struggle to survive, despite Mexico's promise of job offers and cash-based assistance from the U.N. for the first couple months.

"Chiapas, which is the main door for refugees to enter this country, is the poorest state in Mexico, and there are not enough jobs. People can very roughly survive here."

"Many people who have valid legitimate asylum claims are deciding to abandon them and go back to their home countries. And the ones who really want to make it to the U.S. are using smugglers, because that's the only real way to do it."

American groups in favor of stricter immigration say Mexico's tightened enforcement will eventually force migrants without legitimate asylum claims to stay home. They say that will relieve pressure on both American and Mexican governments.

"The Mexican response has to do with creating an effective deterrent on future migration. In other words, they create a situation on the ground where people are coming into situations that they did not envision. Once word goes back down the grapevine to their hometowns that people there will say, 'Well, we're just going to wait this one out until the situation gets better,' so that they won't even leave their homes."

On Wednesday, Mexican human rights groups said that Mexican officials denied them access to local detention centers. These groups have gathered accounts from past detainees about detention centers being severely overcrowded, lacking health care, and providing unsafe food and water.

"In Mexico, detention is the rule, so it applies for everyone equally, even children, even women that are pregnant. There are many, many things, such as a food poisoning, such as cockroaches in the water that people drink, they have to sleep on the floor sometimes due to overpopulation. If they're feeling sick, they're not able to see a doctor or someone just provides them with aspirin."

Mexican President Andrés Manuel López Obrador said Tuesday that migrants must respect the country's law. He added that his government is protecting migrants from smugglers and gangs by preventing them from traveling illegally in the country.