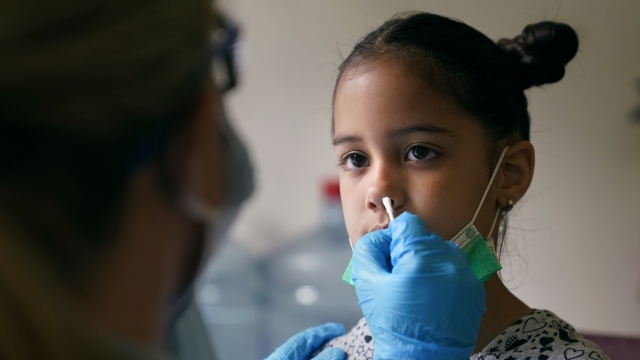 There's only one example from the past century of an eradicated infectious virus: smallpox.

It's a question many of us have: "How will this COVID pandemic end – or will it?"

Experts from Brown and Emory universities broke down the future of the pandemic into four scenarios ranging from totally gone to out of control. We spoke with one of the authors and asked public health and vaccine experts to weigh in, too.

Dr. Rami Kantor is a physician and infectious diseases professor at Brown University.

He said, "How did we come up with this? I think we are part of it aspiration of where we'd like to go. And part of it is a reflection of what we've been seeing in the past year and a half."

At one end of the scenarios – eradication. Simply put: No more COVID virus across the globe. And the disease following it would also be down to zero cases.

"Eradication means there's really no need to control it because it's done," Kantor said.

There's only one example from the past century of an eradicated infectious virus: smallpox. The last U.S. outbreak was in 1949. Could that happen one day with COVID? While scientists don't have a crystal ball, eradication is wishful thinking, at this point.

"It's not as likely just because it seems to be mutating at a rapid rate," said Physician and Health Policy and Public Health Professor at Yale University, Dr. Howard Foreman. "It's you know, it has different ways in which it can mutate. So I don't think it's going to be eradicated."

Moving along, elimination: In this, the virus isn't gone from the face of the earth, but is only spreading in specific regions, nations and continents.

Kantor said, "Elimination can mean, well, there might be less need to control it – either in a certain time or place – but we still need to be aware that it's there."

We've seen this before. For example, the Ebola virus. We've even seen this at times in recent months with COVID even – in Israel, New Zealand, even parts of the U.S., experts say. But right now, the Delta variant is making this especially hard.

"We voluntarily gave up the ability to eliminate or control this by our refusal to wear masks, to get vaccines," Dr. Gregory Poland, physician and director of the Vaccine Research Group at Mayo Clinic, said.

Perhaps the most likely scenario, at this point: cohabitation. We figure out a way to live with the virus, with the focus on preventative vaccines to slow spread and widely available approved drug treatments to minimize death in severe cases.

Kantor said, "It's there and we're doing something that allows us to live our lives, but in a controlled way, but it is there, that infection is still there."

We have examples of cohabitation – like mono or the flu. For most patients, if you have symptoms, it's fairly easy to get a test to confirm you're sick and vaccine protection or medication keep most cases from being life-threatening or requiring a hospital stay.

"It would be great to have a vaccine that would prevent transmission. That may be something that happens the next year or two," Foreman said. "It's always a moving object. We're continuing to collect data and figure out where we are, but we're where we shouldn't always think that it's going to get worse. It doesn't have to."

Lastly, on the other end of the spectrum: conflagration. Effectively what researchers call a "state of war" between us and the virus. It would mean, likely, a variant worse than Delta. We haven't seen an example of it in the U.S. but Delta's spread in India gives us an idea of that scenario.

"The lack of ability of someone to go to the hospital and get simple care, including oxygen and – not talking about ICU level of care in the intensive care unit, the level of care and high level of medical care – but basics and die from it," Kantor said.

Foreman said, "Some of us are concerned that we may see the emergence of variants that might completely, or at least in large part, escape immunity due to prior infection or vaccination – in which case, we start all this over again."

The science will continue to change, and will rely on the virus, which will change and continue to mutate as all viruses do. But the most important thing that impacts the likelihood of any scenario? All of us.

"We generally, historically had a lot more faith in our health care and public health institutions than we do right now," Foreman said. "And I think we need to rebuild that."