How The Military Is Boosting Recruitment Through Video Games 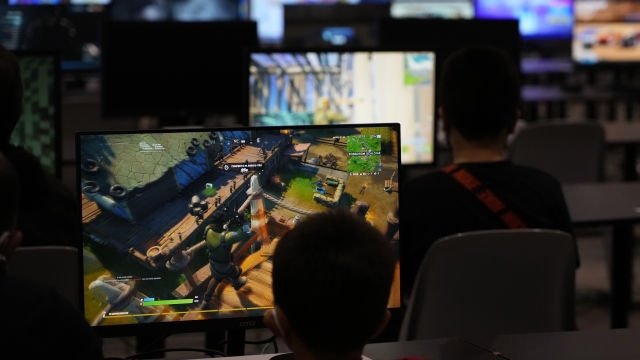 With enlistment dropping, the military is turning to video games to make an impact with young recruits.

For a couple of years now, the Pentagon has raised a growing concern for the U.S. military: Recruitment levels are dropping pretty fast.

The Pentagon is particularly focused on recruitment levels for younger millennials and Gen Z.

A Department of Defense survey found that when young people were asked, "How likely is it that you will serve in the military?," only 11% responded "definitely" or "probably."

So, the military has been investing in some unexpected strategies, and a big one is video games. The Pentagon is hoping the world of esports, streaming and gaming will turn things around for their generational recruitment crisis.

Technically, video games aren't totally new territory for U.S. military recruitment. In the early 2000s, the Pentagon released its own game called America’s Army, a multiplayer shooting game in the vein of Call of Duty or Counterstrike. After decades of pretty reasonable success, it eventually discontinued in early 2022.

The U.S. military has also collaborated with game makers behind franchises like Call of Duty or Doom, sometimes using modified versions of games to teach recruits, at other times consulting with game designers to plan "realistic" war scenarios or even recruiting game designers for Washington think tanks focused on military strategy.

So, this relationship is decades old. But, the dropping numbers of military applicants in recent years has ushered in a new era in the gaming-military complex, and this is where esports and streaming have really dominated.

There is now a pro-esports team for every branch of the military – even the space force. They compete with other pro teams, other military branches and even other allied countries' military teams. The military also sponsors many esports tournaments, which helps enlarge their presence even more.

They've also steadily been streaming on the massive popular platform Twitch, the top gaming streaming site in the world, but this is where recruiters have most recently run into trouble.

Twitch's age limit is only 13-years-old, and critics have objected to using such recruitment tactics on children. In some cases, the military allegedly had links with vague messages like "Sign up to win!" which, when clicked through, only led to recruitment forms.

In 2020, Congresswoman Alexandria Ocasio-Cortez even proposed an amendment to a fiscal bill to stop the military from using video games for recruitment. Lawmakers voted against it, 292 votes to 126. Though it didn't pass, it renewed attention on the controversial practice and put a strain on the military's video game push.

Around the same time as the House vote, the Army found itself in hot water after banning viewers on Twitch who trolled and criticized the military, including writer and activist Jordan Uhl.

After being sued for violating free speech, the military temporarily left Twitch altogether.

Some critics have also pointed out the dangers of trivializing war and militarized violence for children, by equating it with a video game. Even today, the Air Force has a game directly on its website called Airman Challenge that lets you learn about drones and operate one to bomb "insurgents" in Middle Eastern countries like Afghanistan and Iraq.

It's unclear what exactly is next for the military's big recruitment push in video games. Although the recruitment practice has repeatedly found itself in controversy, it seems to be far from slowing down. Esports tournaments and sponsorships are only continuing, and the military has cautiously waded back into the world of streaming.