How Reproductive Rights Were Won In Latin America 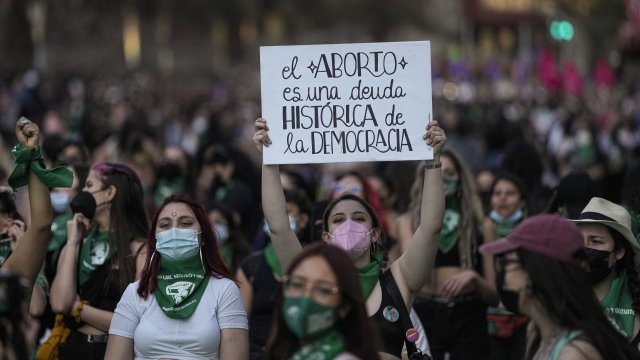 A movement called "The Green Wave" has pushed the success of the reproductive rights movement in three of Latin America's most populous countries.

When the Supreme Court overturned Roe v. Wade, the United States became one of only four countries that have rolled back abortion rights since the mid-90s, joining Poland and two Latin American countries: El Salvador and Nicaragua.

But elsewhere in Latin America, there's been momentum building in the opposite direction.

A widespread, grassroots movement known as "The Green Wave" has been gaining ground for reproductive rights in the region, winning major legal victories in the last couple of years. That's in Latin America's three most populous countries.

In December 2020, lawmakers in Argentina passed a law allowing abortion within the first 14 weeks of pregnancy. Less than a year later, in September 2021, Mexico's Supreme Court decriminalized abortion through a unanimous decision. Then in February of this year, Colombia's highest court legalized abortion during the first 24 weeks of pregnancy. Coming up in September, voters in Chile will decide whether to ratify a new constitution that would protect the right to abortion.

These changes are a huge deal for countries that are predominantly Catholic and historically very conservative with abortion rights.

Argentina is the birthplace of Pope Francis, who made last-minute appeals against both an unsuccessful bill in 2018 and the bill that was passed in 2020. Meanwhile Chile, another historically very Catholic country, had a total abortion ban until as late as 2017.

So, what exactly is this movement, and how did it achieve such huge victories against the odds?

The Green Wave began in Argentina. Organizers took inspiration from the "Mothers of the Plaza de Mayo:" a group of women who protested against the ruling military junta in the late 70s. The women, protesting the thousands of civilian killings ordered by the mIlitary, famously wore white scarves on their heads.

Fast forward a couple of decades, two women decided to pay homage to the protesters without reusing the color white. The original organizers brainstormed together and settled on the color green to symbolize life and growth.

The green bandanas made their debut in 2018 to support a bill to decriminalize abortion. Though the law didn't pass then, the image of the waves of green stuck – and the movement began in earnest.

It's worth noting: The region is still one of the most restrictive in the world when it comes to reproductive health laws. As of 2021, abortion is entirely banned in Nicaragua, Honduras, El Salvador, Haiti, Jamaica, the Dominican Republic and Suriname.

But, the recent wave of victories seems to be changing public opinion. For example, one poll in Mexico showed support for abortion access jumped dramatically from 29 to 48%. That poll was taken just as Argentina was passings its laws, and Mexico would follow nine months later.

This shift correlates with another important shift in the region: Some surveys indicate a decline in Catholicism among most Latin American countries. Argentina had one of the biggest drops in this regional survey, from 76% to 49% reporting they identified as Catholic.

That begs the question: What effect from this might be seen in the U.S.? The green symbolism has already made its way stateside, and some elected officials like Rep. Alexandria Ocasio-Cortez wore a green bandana on the steps of the Supreme Court after the ruling.

Still, the question still remains of how the U.S. might translate this symbolism into real, legislative action seen in Colombia, Mexico and Argentina.