How Do Poisonous And Venomous Animals Resist Their Own Toxins? 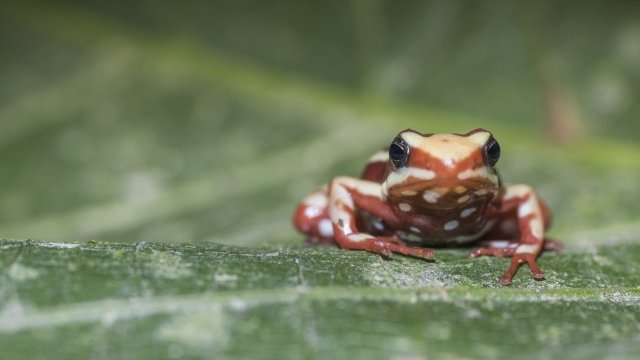 Poisonous and venomous animals have several tricks so their own defense mechanisms don't hurt them.

What would happen if a venomous snake bit its tongue? Or if a scorpion stung itself? Lucky for venomous and poisonous animals, they seem to be immune to their own toxins.

Some venomous creatures avoid harming themselves because the toxin is in a special compartment in their bodies. For example, certain snakes have glands and ducts lined with cells resistant to the venom.

Others have special proteins and enzymes in their blood that prevent toxins from binding to their cells.

This Frog's Slime Could Help Kill The Flu Virus

But it won't be hitting drugstores anytime soon.

The cell membranes of toxic puffer fish and scorpions block their venom, keeping it away from nerve and muscle cells where it could do major damage.

And for poisonous animals essentially bathed in their own toxins, like poisonous frogs, researchers think special amino acids in their muscle cells render them resistant.

All of these immunities have one thing in common: Scientists suggest these capabilities are driven by mutations in their DNA, which might help explain why some members of a species are deadly, while others are practically harmless.