How Sports Stats And Analytics Have Changed The Game 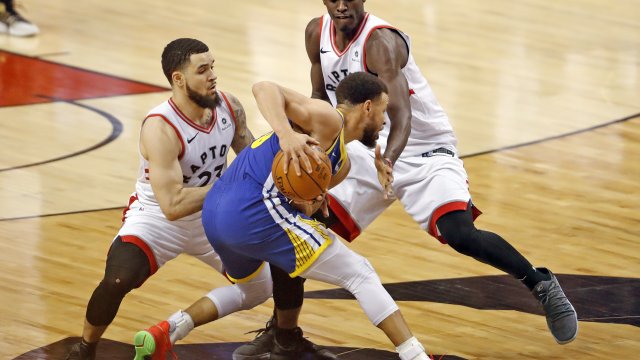 Studying stats and analytics has become a new tool in changing how professional sports teams play.

Professional athletes might be the most carefully measured professionals out there. People around the world can know how you're doing at your job with a couple of clicks: They can see how many times you meet your goals, how efficient you are at it and exactly how well you’re doing.

And the game is changing — fast. Baseball players have ditched so-called “small-ball” to swing for the fences every time. Basketball players fire from well beyond the three-point line instead of shooting jumpers closer to the basket. Across sports, game play is shifting to be as optimized as possible, and it all ties back to the recent boom in sports analytics.

"People have a thirst for data when it comes to sports stats, advanced stats and analytics," said John Tobias, statistician at ESPN and sports analytics professor at University of North Carolina Charlotte.

Tobias is also the founder of Strength in Numbers, a nonprofit that teaches sports analytics to minority and female high school students. He knows better than most just how important stats are for fans.

"I think a lot of times when it comes to stats, I think it kind of proves your argument because, you know, you can have like an argument, but then you have to base it on something," Tobias said.

As the known universe of sports stats grows every day, the development of analytics and advanced metrics has become a crucial tool not just for fans, but for teams and players, too.

Take it from Liz Wanless: She’s a professor at Ohio University who teaches sports analytics, and before she entered academia, she was a professional shot-putter who was an All-American in college.

"This obviously looks very different from when I competed, but with the advance of technology to measure what athletes are doing, there's more data to collect with the understanding that if we can quantify fitness measures, performance measures, those types of things, that gives us a leg up in what we are doing," Wanless said.

That chance for a leg up has offered a new path for teams in smaller markets and allowed owners looking to field a team on the cheap to still succeed against clubs with larger budgets. In some cases, it’s turned around the fate of long-suffering teams.

In basketball, the Golden State Warriors spent over a decade as one of the worst teams in the league, missing the playoffs 17 times in an 18-year stretch. But in the early 2010s, they found two young stars who happened to shoot three-pointers well: Stephen Curry and Klay Thompson.

The Warriors looked to take advantage of this through analytics. They were one of several teams that improved their data collection to figure out where and when they shot the ball. They quickly realized that other than shots very close to the basket, it was more efficient to take a few steps back and try to score three points instead of two. But, there’s a bit more to it than that.

He told Newsy that the more data teams got about shots, the more the trade-off in stepping back to the three-point line made sense.

"Once we started to get that data in ... was when people really started to realize that, yes, efficiency, accuracy, you know, at least in NBA players, drops off some from like 17 feet to 24 feet, but not nearly as much as enough to overcome the extra point you get from that," Partnow said.

Saying Golden State’s new approach worked was an understatement. The Warriors won three championships in five years. In those other two years, they still made the NBA Finals and also set the record for most wins by any team in a season ever. Curry has now made more three-pointers than any player in NBA history, and he did it in five fewer seasons than the previous record-holder.

Now as teams invest more heavily in analytics, basically every team has joined in, with NBA teams attempting roughly twice as many three-pointers now as they did in the year before Curry entered the league in 2009.

But, it’s not necessarily the case that teams are better these days; they’ve just discovered a new tool.

James Dator, a senior staff writer at the sports site SB Nation, has written about the proliferation of the three-point shot in the NBA. He told Newsy the Warriors weren’t the first team to shoot a ton, but they turned it into championships.

"The big thing that the Warriors were doing wasn't necessarily that they were taking more threes," Dator said. "The difference is they were more accurate doing it because obviously they had two amazing shooters in Steph Curry and Klay Thompson — still do, for that matter. But they were hitting points at hitting their shots at such a high mark that they were kind of the volume shooters. So instead of spreading it to all five guys, they just let them take as many as possible."

While not every team could win titles like the Warriors, other teams who made the switch early still reaped the rewards.

"A team that got a lot of benefit by being early adopters was the Houston Rockets," Partnow said. "I think that for a number of years, a gained advantage probably worth maybe even a half a dozen wins a year just by taking shots from higher value locations than everyone else."

There are other examples in other sports: the Tampa Bay Rays have become a regular contender in Major League Baseball by investing heavily in analytics despite also being one of the league’s lowest spenders.

In baseball, most teams still use the traditional approach: a starting pitcher goes more than halfway through the game and then turns the ball over to relief pitchers. But now, teams like the Rays are lightening the load on starters and using more relief pitchers.

And, they have literally changed how the game starts.

"One of the ways they try to hijack the game, if you will, is essentially moving past the starting pitcher," R.J. Anderson, baseball staff writer at CBSSports.com, said. "So they didn't have someone take the ball every day and tend to work five, six, seven innings just because that's what tradition says they should have done. What they did instead was there with the starting pitcher who usually was a middle reliever or even a setup pitcher, and they would let him go an inning, maybe two innings, and then they would insert someone and they would let them go three to four, maybe five innings, depending on the score and how they’re pitching and whatnot."

Anderson, who has written about baseball analytics for over a decade, points out the Rays found data that showed that when their pitchers stayed in the game long enough to face hitters a third time, they did a lot worse.

Using an “opener” also means that pitchers don’t have to face as many hitters. That allows them to use more energy to throw harder and more aggressively, and that has a knock-on effect for the rest of the game.

"Hitters have responded by really adapting to these uppercut swings," Anderson said. "You know, the thinking is basically we're not going to string together three or four consecutive hits against these pitchers anymore. Now, with quality of pitches, the throwing, not with the defenses we're seeing. So how do we score runs? And, the answer in the hitters' mind has been the swing for the fences."

But as analytics become a bigger and bigger part of the game, not everyone is happy.

In baseball, where analytics have taken arguably the largest foothold, there’s a worry that they’ve become too much a part of the game. Fans often lament how changes like hitters striking out more, defenses shifting to optimal positions, or the increase in relief pitchers have produced a game with less action and moving at a slower pace.

Fans have a point on that last one. Data from the stat site Baseball Reference shows that regular nine-inning games in 2021 averaged three hours and 10 minutes. That’s the longest average game length ever and a whole 24 minutes longer than the same game in 2005.

But even as analytics create some minefields and split up fans, they're still gaining speed, especially as teams and individuals use them to find new ways to win.