How State Media Became A Weapon Of Information Warfare 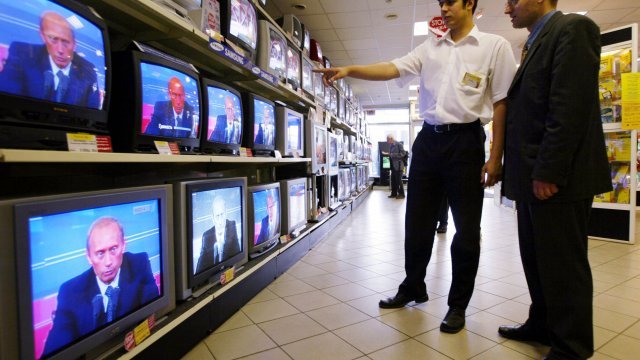 Russia, China and others are using their state-run media abroad in hopes of expanding their influence beyond their borders.

Media is everywhere — newspapers, television, radio, the internet. And how free that media is from government interference is often a way to gauge the health of a democracy. But some governments do interfere with media, and when they do, they can use it as a powerful tool inside and outside their borders.

Imagine government control over media is on a spectrum. Almost all countries have some publicly funded media or at least some limits on what can broadcast and when. But other nations have a much tighter grip. China has very little privately owned media, so it has near total control over what its people watch and read.

This can help keep an authoritarian regime in power. In 2001, the Russian government took over NTV, one of the country's last independent national broadcasters at the time, and replaced the management. Unsurprisingly, NTV is reported to have shown a heavy bias toward United Russia — the party in power — during the 2007 parliamentary elections. Since then, the Russian public has been bombarded with messaging favoring President Vladimir Putin and his party, and he's now been in power more than 15 years.

In Cameroon, unrest is building, not over ethnic or religious lines, but over linguistic lines between French speakers and English speakers.

But state-run media isn't just a way to rally support at home. Increasingly, it's used as a foreign policy tool. Russia's state-funded outlet RT made that clear during the 2016 U.S. election. And China is starting to gear its own state-run channel, CCTV, as an advocate for China's government abroad.

To do this, governments really only need to make sure their media has a decent presence in foreign markets. China's CCTV and Russia's RT are both available in the U.S. over satellite and, of course, can be viewed and shared online. Russia's state-owned outlet Sputnik recently acquired a local Washington, D.C., station to broadcast its radio show. This creates an unfair playing field for liberal democracies — like the U.S. and in Europe — that let foreign governments infiltrate their media markets, something Russia and China crack down on at home when the tables are turned.

And once in those foreign democratic markets, RT especially has been savvy in embracing extreme ends of the political spectrum — eroding faith in democratic systems and encouraging breakoffs, from Brexit to California independence.

All this falls under a concept of government-owned media called public choice theory. It says if a government can control media, it will ultimately use it to its own ends to undermine democracy. There is another theory for state-owned outlets. Public interest theory says information is a public good, so the government should provide it. The BBC in the United Kingdom is one example, but it has safeguards meant to protect its editorial independence.

But, in the hands of an authoritarian government, press freedom is fragile, and state media can turn from a public good into a weapon of information warfare.