How Textiles From Islamic Dynasty Show Range Of Political Influence 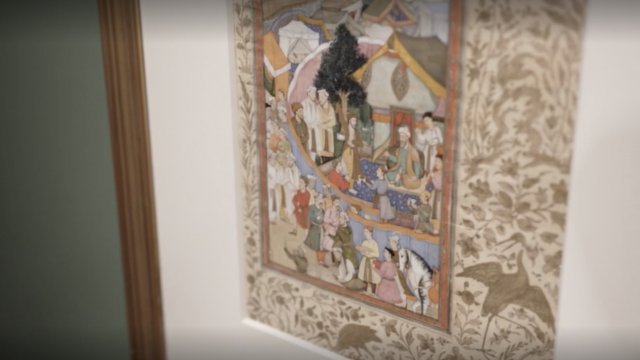 Textiles from Iran's Safavid Empire are on U.S. soil for the first time.

Textiles were once a tool of power and influence.

"The number of elaborate coats and robes you wore, whether they were fur trimmed or not, really indicated your social status. Fabrics in particular — silk was really a very important medium," said Massumeh Farhad, Chief curator of Persian, Arab and Turkish art at the Smithsonian National Museum of Asian Art.

In the 17th century what you wore was about more than what was on sale. Clothing could be used as a means of communication and political influence, and there may be no greater example than Iran’s Safavid empire, whose textiles are on display at the Smithsonian in an exhibit titled Fashioning an Empire: Safavid Textiles from the Museum of Islamic Art, Doha.

"In order to impress foreign rulers, you would give them either sort of finely woven silks, velvet," Farhad said.

"If you really want to show respect or reward a person in the highest way, you would give them a robe of honor and only the ruler could give out robes of honor," Farhad said.

Farhad says the influence of the Safavid empire continues until this day in the faith of the region.

"Iran at the time adopted Shiism as their state religion, so while the Mongols and the Ottomans were Sunnis, Iran, Safavid was Shiite and has continued to remain Shiite since that time."

This is the first time the art has been on U.S. soil, continuing the centuries long impact on a modern audience.