How The Big Ten Could Force The Big 12 To Expand 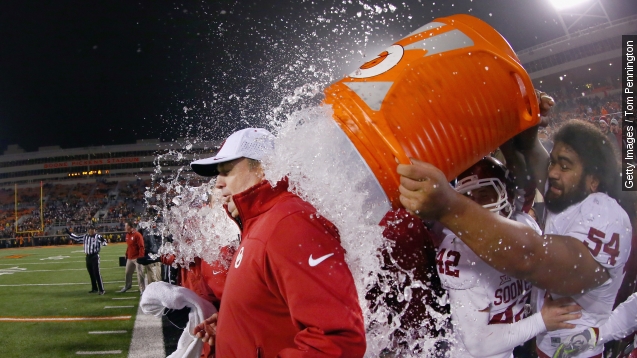 The 10-team Big 12 wants a conference title game, but it'll likely need at least 12 teams before the Big Ten will let that happen.

It looks like the Big 12 Conference is getting closer to expanding. The reasons? A desire to play a conference championship game and some intervention from the Big Ten.

As it stands now, a conference needs to have at least 12 teams and two divisions to hold a championship game, but the 10-team, no-division Big 12 is trying to strike down that rule. (Video via Big 12 Conference)

The effort faced pushback from the Big Ten, which added an amendment requiring leagues at least have divisional winners in the title game, something that would be difficult for the Big 12 given its smaller size.

Big Ten commissioner Jim Delany says he doesn't want to force the Big 12 to expand but said it would be inconsistent if some leagues used divisions to pick their champ and others just sent the top two teams to a title game. (Video via Big Ten Network)

Having a title game — as opposed to just naming a champion at the end of the year — is a big deal for conferences because an impressive title game win can boost a team's College Football Playoff standing when it's needed most. (Video via Big Ten Conference)

The Big 12 held championship games at one time, but when realignment forced the conference to shrink to 10 teams, a title game became impossible, and the conference switched to a round-robin format.

This came back to hurt the conference last year when co-champions Baylor and TCU were both left out of the playoff.

And though the Big 12 will be represented by Oklahoma in this year's playoff, the Sooners were jumped in the standings by Michigan State, something that was helped along by the Spartans' win in the Big Ten title game. (Video via University of Oklahoma)

All this points to the option the Big 12 tried to avoid: adding two more teams to the league. Then, the conference could have two six-team divisions and a title game. (Video via Big 12 Conference)

As Big 12 commissioner Bob Bowlsby told ESPN, "We don't think we ought to be forced into adding schools, ... but it could end up that way."

Though the Big 12 would like to stay at 10 teams for now, there is a silver lining: At least expansion would mean the conference would live up to its name.