How The COVID Lockdown In Shanghai Has Spun Into Chaos 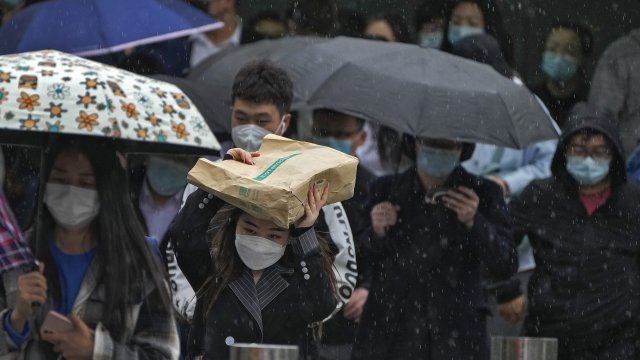 China's zero-COVID policy has locked residents in their homes for way longer than initially planned. Now it's created urgent problems for citizens.

China has been seeing its largest surge of COVID cases since 2020. In response, the government has enacted strict city-wide lockdowns again.

In many cases, this lockdown means not being able to leave the house at all — even to get food or supplies. Public transport is shut down, and even hospitals may be closed to non-COVID patients.

These city-wide shutdowns are the core of China’s zero-COVID approach, meaning "zero active cases and zero new cases every day." The policy locks down full cities at a time, with regular intensive testing, tracing and isolating of anyone who tests positive.

But things have taken a turn for the worse for the 26 million people in Shanghai, the country's most populous city. Residents were told the lockdown would be about four days, so only few were prepared for a shutdown that has now lasted over a month.

Since late March, tensions between residents and government officials have been quickly escalating. What’s more, the ripple effects will be felt throughout the country, and even across the globe.

NPR's Emily Feng, who is based in Beijing, gave Newsy a detailed update.

"The problem that we're seeing now is that Omicron, BA.2, these variants that spread super quickly, and so it's challenging even the Chinese model because they're not able to test quickly enough," Feng said. "There has been an overwhelming and sustained critical response to this lockdown, and to understand that, it's because Shanghai is one of the richest and most cosmopolitan cities. So for the last two years, even as other cities were getting locked down, sometimes irrationally so and struggling to deal with new cases, Shanghai was much more flexible."

In Early April, Shanghai was reporting more than 73,000 new cases of COVID since the resurgence of the Omicron variant — a steep rise that hasn't been seen in China since early in the pandemic. So, it soon became the ultimate testing ground for the zero-COVID approach.

The policy puts strict limits on public transportation and travel in and out of the city. Nonessential businesses are closed, and most vehicles are banned from the streets. Government health care workers and volunteers conduct regular testing, and if residents test positive, they'll be taken to state-built temporary quarantine facilities whether they choose to go or not.

The lockdown has also created other urgent problems for residents stuck at home.

"I need a scientific and reasonable judgment from the government, instead of watching the number of new cases every day as the increase of confirmed cases never ends," said Liu Yafei, a Shanghai resident under lockdown.

"Everyone tries to access the [food delivery] shopping website, so the page won't load," said resident Yusuke Hiyane. "These conditions continued, and I wondered if it would be impossible for me to get any food."

"So a lot of people are still having issues getting food medicine that they need each day," Feng said. "Hospitals have been closed to non-COVID patients. You can imagine there have been a lot of excess deaths linked to diseases other than COVID that have happened because of lockdown."

The fallout was immediate. Some troubling scenes began appearing online showing the severity of the lockdown measures, as well as rising tension and resistance from Shanghai residents.

One video of residents shouting out their windows went viral in early April, and another showed quadruped robots passing on reminders to stay inside, wash your hands and check your temperature.

A drone was seen flying by apartment buildings in another video where residents were singing in protest. Alice Su of The Economist translated the drone's message as: "Please comply with COVID restrictions. Control your soul's desire for freedom. Do not open the window or sing."

Despite censorship efforts from the Chinese government, many photos and videos of residents resisting officials have made their way online as well.

"When it comes to the actual organic content that is getting censored, I'm talking about photos that people are posting of protest signs that are being hung up all around Shanghai, photos of people getting tested, videos of people having their their doors broken down, or COVID officials coming into their homes to take them away to central quarantine," Feng said. "Personally, I've run up against a lot of people who have been trying to interview who have said we're happy to do interviews. We want the world to know what we're going through, but we won't talk to foreign media because we don't think that will help. Our situation only hurts us. It'll get us in trouble with the police, and it also invites nationalists online to attack us. So you've seen a lot of resistance, but you've also seen a huge amount of government pushback as well."

As the anger spread online, China's government censors struggled to keep up with complaints on social media, censoring hashtags like “Shanghai Needs Food” that residents were using to call for food delivery.

Now, all eyes turn to President Xi Jinping, the political face of the zero-COVID policy, to see how China moves forward. Even though vaccination rates are high overall, the Chinese vaccines have proven to be less effective than mRNA vaccines — especially against variants. Distribution has also been unequal across the country and across age groups. Rather than dialing back on lockdowns, it seems the government is actually doubling down.

But we may finally be turning a corner. As cases seem to be easing, there are signs the restrictions in Shanghai may be slowly loosening.

"With Shanghai and before that in Hong Kong, there was also a massive outbreak because of the slight relaxation in standards," Feng said. "I think you're going to see Chinese policymakers be more wary of adopting any kind of relaxation because they're worried that that could lead to an explosion of cases that are completely uncontrollable. Zero-COVID still has enormous public support in China, and the reason for that is because more people enjoyed the benefits than had to suffer the consequences. You know, more people were able to travel and go about their daily lives than were actually under the lockdown at any given point. But with these infections, very infectious variants and with Shanghai, for example, we're starting to see more and more people have to live under some kind of lockdown control. So Shanghai could be a tipping point in which the costs start to outweigh the benefits of zero-COVID."